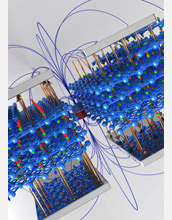 This image is an artistic visualization of the atomic and magnetic moment structure of chromia. The presence of the permanent magnet in the center of the figure, with its magnetic stray-fields acting simultaneously with electric fields on chromia, captures the idea behind spintronics. Promising spintronic device concepts use an electrically controlled interface and surface magnetization. Surfaces of magnetoelectric materials such as chromia show roughness-insensitive, electrically switchable magnetization in the presence of a small symmetry breaking magnetic field opening up exciting prospects for spintronic applications.

Download the high-resolution JPG version of the image. (1.9 MB)

This movie is based on a cartoon of the project researchers' heterostructure showing the atomic and spin structure of chromia and the cobalt palladium (CoPd) ferromagnetic thin film on top. Electric fields are "measured" by a multimeter and applied via electrodes (dark yellow films) sandwiching the heterostructure. The applied voltages are displayed on the multimeter. While the movie progresses the voltages change from 0 to +1.5kV then back to -1.7kV. A small constant magnetic field is applied in the direction indicated by the blue arrow simultaneously with the applied electric fields. The primary objective of the movie is to show a switching event of the magnetic hysteresis of the CoPd film which sets in at about ±1.4kV. It is this electrically controlled of the magnetization which makes the finding highly relevant for spintronic applications. In addition to the pronounced switching effect we show largely exaggerated the electrically controlled exchange bias due to the linear magnetoelectric effect of chromia.