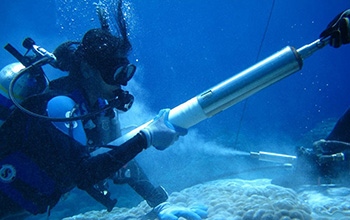 The Indian Ocean has been warming much more than other ocean basins over the last 50 to 60 years, scientists have found. While temperature changes basin-wide can be attributed to human-induced climate change, it's difficult to assess whether contemporary heat and freshwater changes in the Indian Ocean since 1980 represent an anthropogenically-forced transformation of the hydrological cycle.

A U.S. National Science Foundation-funded paper takes a broad look at whether heat and freshwater changes in the Indian Ocean are consistent with the increase in rainfall that is expected in response to human-induced climate change, or whether these changes are due to natural multidecadal variability and other factors.

That distinction has "big implications for climate risk assessment and for the densely populated regions around the Indian Ocean that are vulnerable to the effects of climate change," says Caroline Ummenhofer, a scientist at the Woods Hole Oceanographic Institution and lead author of a paper published in Nature Reviews Earth & Environment.

The paper brings together scientific tools and data sources to address key questions regarding climate change in the Indian Ocean. "Scientific communities need to come together to have discussions about what we can tell from our data, how we can compare apples and oranges, and how we can bring all this information together to have a better understanding of the entire Indian Ocean system," Ummenhofer says.

The Indian Ocean, the paper notes, is particularly vulnerable to human-induced climate change, in part because the ocean is bounded to the north by the Asian continent. Ummenhofer says the basin could be a "canary in a coal mine,” because the changes observed in the Indian Ocean could happen in other oceans.

Baris (Mete) Uz, a program director in NSF's Division of Ocean Sciences, added that "the study combines recent instrument data with older records derived from coral cores that preserve historical information just like tree rings do. It’s important to understand how heat is stored and dispersed in the ocean, because that’s where most of the heat captured by the greenhouse effect goes."