Baboon Fathers Really Do Care About Their Kids

In a finding that surprised researchers, a recent three-year study of five baboon groups at the foot of Mount Kilimanjaro in Kenya reveals that baboon fathers overwhelmingly side with their offspring when intervening in disputes. 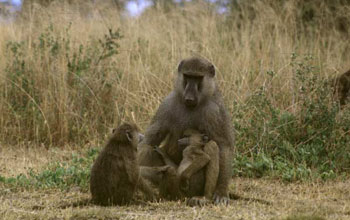 A father baboon cares for one of its own offspring as another juvenile displays what researchers ...

In a finding that surprised researchers, a recent three-year study of five baboon groups at the foot of Mount Kilimanjaro in Kenya reveals that baboon fathers overwhelmingly side with their offspring when intervening in disputes.

Not that baboons have a bad-dad reputation, but their links to females and immature baboons are rather loose by primate standards. For example, females and males have multiple mating partners, and they do not form permanent bonds with each other.

According to one of the study's authors, biologist Susan Alberts of Duke University, "This means your average male baboon has much less certainty about which kids he fathered than your average male gorilla, for instance."

The fact that paternal care--the tendency for males to care for their own offspring -- runs so strongly through baboons suggests that such care "may be a very ancient evolved trait in the primate lineage," Alberts said.

The co-authors of the 2003 study include Duke biologist Jason Buchan, University of California at Los Angeles anthropologist Joan B. Silk and Princeton University biologist Jeanne Altmann. The study, published in the journal Nature, was funded by NSF, the Chicago Zoological Society, the L.S.B. Leakey Foundation and the National Geographic Society.

To identify true paternal care in a complex primate society, the project needed to determine paternity for many infants. To do this without disturbing the population meant collecting baboon feces and then, with a protocol adapted from the study of human stools, isolating and comparatively analyzing the DNA within it.

Silk, who heads another NSF project that focuses on the adaptive value of social bonds among female baboons, said it has long been known that many primate males are dedicated fathers. "Up until now, the best candidates for 'Dad of the Year' awards come from species that maintain long-term pair bonds, like the siamang and owl monkeys," she said. "Humans represent another species with high paternal investment."

That the more promiscuous, less committed baboons also vie for such honors suggests that "a capacity for paternal care is not tightly linked to social organization," said Silk. Rather, she said, it may be a "fundamental element" of male reproductive strategies among primates.

The study, which hinged on data collected by three Kenyan research assistants and cooperation with the Kenyan government, monitored 75 juvenile baboons for whom fathers were clearly identified through comparisons of DNA in fecal samples. About half of the juveniles still shared social groups with their fathers. The observers also identified 15 adult males who lived in groups that included their own offspring and unrelated juveniles; all but three of the 15 provided more care to their own kin.

From July 1999 to July 2002, the observers witnessed 73 disputes in which a male intervened in a dispute between one of his offspring and an unrelated baboon; and in 69 of those conflicts, fathers sided with their offspring.

While the biologists were able to identify the players from the DNA samples, it remains unclear exactly how baboon fathers identify their offspring. They probably rely upon multiple cues, the researchers believe. "That is," said Alberts, "they use any information they can to estimate their own paternity."

An adult male, for example, may associate his monopolization of the mother's fertile period with the baboons born soon thereafter, which is considered a behavioral cue. Or he may rely on phenotypic cues, ones based on observable characteristics derived from the offspring's specific genetic code, such as physical appearance or an odor.

According to Jane Brockmann, who directs NSF's animal behavior research program, "This study puts together the behavior and physiology of individuals with the genetic and demographic structure of groups and populations. It will substantially increase our understanding of the evolution of complex social behavior." NSF's physical anthropology office jointly funds the project.

The project is the latest chapter in an ongoing 31-year study that has followed six generations from 11 baboon troops, representing more than 1,000 individuals. By developing innovative, non-invasive ways to collect hormonal and genetic data, and by developing a shared database of behavior, Altmann and Alberts, Brockmann said, have allowed new questions to be studied and have helped train many university students in Kenya and the United States.

With continued NSF support, Alberts and Altmann plan to examine more baboon questions of their own: Does the presence of a father affect whether an infant or juvenile survives? How do father-offspring relationships form? Could it be that mothers play a role by selecting for friendly fathers in the first place?

To learn more, she and Alberts will examine physiological factors associated with baboon behaviors and life history by using fecal analysis to assess variations in levels of reproductive and stress hormones.

Silk, meanwhile, wants to see what causes variations among the size and composition of social relationships among female baboons. "And adult males," she said, "may be an important part of females' social networks."