After 15 years of observation and a lot of patience, the world's premier planet-hunting team found the first planetary system that reminded them of our home solar system. 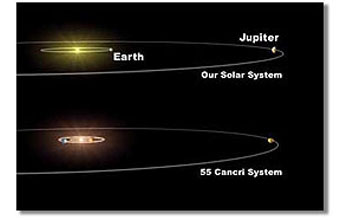 This graphic depiction compares our solar system with a newfound planetary system, 55 Cancri.

After 15 years of observation and a lot of patience, the world's premier planet-hunting team found the first planetary system that reminded them of our home solar system.

In 2002, Geoffrey Marcy, astronomy professor at the University of California, Berkeley, and astronomer Paul Butler of the Carnegie Institution of Washington, D.C., discovered a Jupiter-like planet orbiting a Sun-like star at nearly the same distance as the Jovian system orbits our sun.

"All other extrasolar planets discovered up to now orbit closer to the parent star, and most of them have had elongated, eccentric orbits," Marcy said. "This new planet orbits as far from its star as our own Jupiter orbits the Sun." NSF and NASA have long supported the planet-hunting team.

The star, 55 Cancri in the constellation Cancer, was already known to have one planet, announced by Butler and Marcy in 1996. That planet is a gas giant slightly smaller than the mass of Jupiter and whips around the star in 14.6 days at a distance only one-tenth that from Earth to the Sun.

Using as a yardstick the 93-million-mile Earth-Sun distance, called an astronomical unit (AU), the Jupiter-like planet orbits at 5.5 AU, comparable to Jupiter's distance from our Sun of 5.2 AU (about 512 million miles). Its slightly elongated orbit takes it around the star in about 13 years, comparable to Jupiter's orbital period of 11.86 years. It is 3.5 to 5 times the mass of Jupiter.

"We haven't yet found an exact solar system analog, which would have a circular orbit and a mass closer to that of Jupiter. But this shows we are getting close, we are at the point of finding planets at distances greater than 4 AU from the host star," Butler said. "I think we will be finding more of them among the 1,200 stars we are now monitoring."

The team shared its data with Greg Laughlin, assistant professor of astronomy and astrophysics at the University of California, Santa Cruz. His dynamical calculations show that an Earth-sized planet could survive in a stable orbit between the two gas giants. For the foreseeable future, existence of any such planet around 55 Cancri will remain speculative.

In announcing the Jupiter-like planet, Marcy, Butler and their team also announced a total of 15 new planets, including the smallest ever detected: a planet circling the star HD49674 in the constellation Auriga at a distance of 0.05 AU, one-twentieth the distance from Earth to the Sun. Its mass is about 15 percent that of Jupiter and 40 times that of Earth.

Marcy and Butler used a technique that measures the slight Doppler shift in starlight caused by a wobble in the star's position due to the gravitational tug of an orbiting planet. By observing over a period of years, they can infer a planet's approximate mass and orbital size and period.

The star 55 Cancri is 41 light years from Earth and is about 5 billion years old. Further data are needed to determine whether yet another planet is orbiting it, because the two known planets do not explain all the observed Doppler wobbling. One possible explanation is a Saturn-mass planet orbiting about 0.24 AU from the star.