Research by engineering and medical teams holds tremendous promise for people who have lost their sight due to retinitis pigmentosa and other degenerative eye diseases. 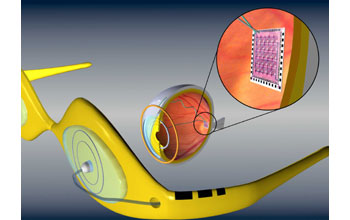 Artificial retina device, consisting of a glasses-mounted camera and microchip.

Within the next 10 years, artificial vision could help many blind persons “see” again, thanks to advances by engineering and medical researchers and others. NSF-sponsored engineer Wentai Liu (now at the University of California-Santa Cruz) and a team of researchers from North Carolina State University have been collaborating with a team of University of Southern California Doheny Eye Institute surgeons, led by NSF grantees Mark Humayun and Eugene de Juan, to develop a device -- the Multiple-Unit Artificial Retina Chipset (MARC) – designed to restore at least partial sight to the tens of millions of people worldwide who are blind due to retinal degenerative conditions.

According to the American Foundation for the Blind, approximately 1.3 million Americans are legally blind – many of them are victims of retinitis pigmentosa and age-related macular degeneration.  Both degenerative diseases destroy cells in the retina, the region in the rear of the eye that translates incoming light into signals for the brain.

For people with these conditions, the MARC holds tremendous promise. The device will consist of a glasses-mounted ‘camera’ that transmits information about an image, via radio waves, to a transceiver and stimulator microchip, which then drives a 2-millimeter array of electrodes that have been surgically implanted on a recipient’s retina.  The electrodes send signals through the optic nerve to the brain, enabling the recipient to see an image.

NSF’s Bioengineering and Environmental Systems Division within the Engineering directorate provided significant support to the researchers. “If not for NSF funding,” says Dr. Humayun, “none of the microchips currently available would be possible.”

Development of the device followed tests on blind patients conducted by Humayun, de Juan, and their colleagues. Their studies were the first to demonstrate that patterns of electric pulses into a person’s blind eye can produce a visual response.  However, a permanently implantable device faced numerous engineering obstacles, such as how to power a chip that is inside the eye and how to prevent rejection by the recipient’s immune system.

The MARC developers devised solutions that differ from other artificial retina concepts.  For power, the device’s external transmitter can send energy to the chip in the same manner as it delivers image data, via radio waves.  The internal components use the same technology to receive new programming and transmit diagnostic information.  The researchers overcame biocompatibility concerns by using several new synthetic materials that have been shown to work well in animal testing, and by ensuring that the electrode array is small -- limiting stress on the retina.

The ‘vision’ produced by the MARC is similar to a pixelated image on a computer screen.  The first generation devices have a resolution of 25 electrodes (5 electrode x 5 electrode array).  In clinical trials conducted in 1998, blind volunteers were able to recognize single letters and simple shapes.  However, Humayun is hoping to test a fourth generation device by the end of this decade that will have a resolution of 625 electrodes (25 x 25 array), sufficient detail to recognize some facial features.  Intermediate devices with 60 electrodes will be tested in patients in the next 1-2 years.

Says Dr. Humayun, “I strongly believe that the retinal prosthesis will be every bit as successful as, and maybe even more useful than, a cochlear implant,” the device which has restored hearing to more than 30,000 people worldwide.
-- Josh Chamot

Related Awards
#9810914 The Realization of a Retinal Prosthesis for the Totally Blind
#0201927 Biocompatible Technology for a Light Sensitive Retinal Prosthesis
#9808040 Implantible Multiple Unit Visual Prosthesis: Towards a Second and Third Generation