MIT doctoral student Saul Griffith is an old-fashioned inventor with high-tech style. His inventions include a 'printer' for low-cost eyeglass lenses and electronic goggles to diagnose a person's eyeglass prescription. 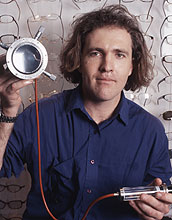 MIT doctoral student Saul Griffith is an old-fashioned inventor with high-tech style. For his inventions, including a “printer” for low-cost eyeglass lenses and electronic goggles to diagnose a person’s eyeglass prescription, Griffith won the $30,000 Lemelson-MIT Student Prize for 2004.

As a participant in MIT's Center for Bits and Atoms (CBA), which is working to close the gap separating information technology from the rest of the physical world, Griffith has access to all the tools a modern-day tinkerer could ask for. CBA is funded by a $13.75 million Information Technology Research award from the National Science Foundation (NSF).

Out of his research on fabricating with mechanical logic, as well as his interest in applying emerging rapid prototyping technologies to social needs, Griffith came up with a way to address an issue faced by a billion people worldwide who can't afford traditional eyeglasses.

Griffith developed a "desktop printer" for eyeglass lenses that uses a patent-pending lens-molding technology to produce almost any prescription lens in less than 10 minutes and using about 40 cents' worth of materials.

But making the lenses is only half the problem. Properly diagnosing vision problems also requires expensive technologies that aren't available to many in the developing world. To bridge this gap, Griffith also invented a prototype device to test the human eye.

Patients put on the device, which looks like oversized goggles, and look at the world around them. A sensor monitors the lens in the patient’s eye and adjusts the device’s lens to cancel the refractive errors and get the correct prescription.

With Neil Houghton, Griffith has co-founded Low Cost Eyeglasses, a for-profit social enterprise, to make his inventions and other technologies for reducing the cost of prescription eyewear widely available in developing nations.

The Lemelson-MIT Student Prize also recognized Griffith's many other inventions. These include "e-rope" that can sense the strain of the load it bears; a "printer" made from LEGO blocks and a small heater that forms 3-D objects out of chocolate; a bicycle with a frame that can be easily personalized; and methods for manufacturing 3-D devices at micron and submicron scales

Griffith also shares his inventing urge through "Howtoons," one-page cartoons that teach science and engineering while they show children how to build their own toys, games and inventions out of everyday household items.