Can mathematics help prevent forest fires? It’s not as far-fetched as it sounds. A statistician has combined unprecedented amounts of historical and environmental data to create statistical models that promise more accurate estimates of fire hazards. 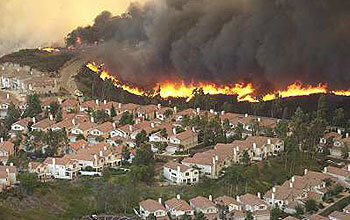 Approaching wildfire threatens a subdivision near Los Angeles, California, in 2003.

Each year, residents of Southern California face the possibility that wildfires threaten their lives, homes, and businesses. When dry brush and chaparral are plentiful in the mountains and foothills, devastating fires can spread quickly.

"The 2003 Fire Siege destroyed more than 3,600 homes from Santa Barbara to the Mexican border," according to the Los Angeles County Fire Department.

The U.S. Forest Service reports that about 90 percent of fire management officials currently estimate wildfire danger by using a tool called the Burning Index (BI), a composite of climate, weather, and vegetation data. While the BI offers a useful snapshot of fire conditions, it omits crucial historical and environmental information, says Dr. Frederic Paik Schoenberg, an assistant professor of statistics at UCLA.

"The BI ignores information on the spatial pattern of past burns, which can be very useful in determining the time since the last fire, and more importantly, how in general the background burning varies over space," says Schoenberg. His research from 1999-2002 focused on improving estimates of wildfire hazard and evaluating models that describe burning patterns.

Schoenberg has supplemented the Burning Index by combining a larger environmental dataset with recent records of wildfire occurrences in Los Angeles County. Through his research, funded by the National Science Foundation and the Environmental Protection Agency, he has developed methods that could be used to enable firefighters to more accurately anticipate threat levels and dispatch personnel and equipment more effectively.

Schoenberg and his team of five graduate students worked closely with UCLA environmental scientists, as well as the Los Angeles County Fire Department, the Department of Public Works, and the National Park Service to collect an expanded wildfire dataset. The information they gathered pinpoints the locations and times of past burns in the region. Such data is important because wildfire rarely spreads to areas that have recently burned, an observation that tends to support the practice of prescribed burning. However, according to Schoenberg, information about past fires is often neglected in wildfire hazard assessments.

In his analysis of local environmental conditions--including altitude, humidity, and soil characteristics--Schoenberg found threshold relationships for each variable. For example, the wildfire hazard appears to increase with average temperature linearly up to a threshold of 21 degrees Celsius (70 degrees Fahrenheit), but wildfire occurrences do not increase as temperatures rise above the threshold.

Schoenberg also used "point process" statistical methods to describe the exact times and locations of fires throughout Los Angeles County (using 1976-2002 wildfire data). In effect, Schoenberg and his team have developed an alternative to the Burning Index by using decades of detailed fire history in Southern California to assess the region's wildfire risk.

Schoenberg's methods for estimating fire hazard could also be used to analyze the historical and environmental data of other natural threats--including floods, tsunamis, hurricanes, and epidemics. In fact, his most recent research focus includes the evaluation of models for gauging earthquake risks.