NSF Researchers Improve Barcode Scanners; Advances Lead to Widespread Use of the Technology

From tracking the sale of chewing gum to following the movements of penguins in one of the world's harshest environments, barcode systems automatically capture all kinds of data, thanks in part to NSF-supported improvements in scanner technology. 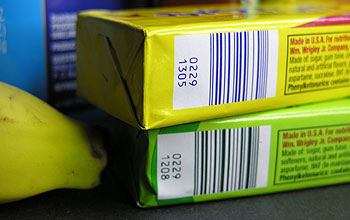 Barcodes are a familiar feature of product packaging today.

Editor's Note: On June 26, 1974, in a supermarket in Troy, Ohio, according to reports, the first commercial use of a barcode scanner to scan a product bearing the Universal Product Code took place.

Barcodes are not just for speedy checkout at the supermarket -- the familiar striped patterns have become a major tool for tracking everything from consumer trends to penguins in the wild. Much of the early development of the technology came from university and industry efforts, but government supported research in the late 1990s advanced the state of the technology, enabling the use of barcodes nearly everywhere.

Bernard Silver and Norman Joseph Woodland began developing the first barcode system in 1948. By the early 1970s, an industry group adopted the Universal Product Code (UPC) as its standard. The familiar series of bars and spaces continues to be the main code in use in the United States today. The first UPC-labeled product -- Wrigley's chewing gum -- was scanned at a Troy, Ohio, supermarket in 1974.

Scanners work by sweeping a laser across the barcode to detect the pattern based on where the light is reflected back; black bars reflect less light than the white spaces. Once the barcode is read, product information is retrieved from a computer database.

NSF researchers played a critical role in improving the scanners that help turn barcodes into information. In the early 1990’s, Theo Pavlidis, a computer science professor at the State University of New York (SUNY) at Stony Brook, received NSF support for research to improve computer vision and optical character recognition. He and his colleagues developed a new algorithm, or series of instructions, for a scanner's computer brain to use when a bar code is messy or hard to read.

The SUNY researchers developed software that relies on "fuzzy logic," which allows a computer to make an educated guess about what it sees. The new software enabled barcode scanners to read codes under less-than-ideal conditions, opening up a world of new opportunities for the devices.

Today, barcodes are for just about everything, from packages in the mail to patients in hospitals. Researchers even tag animals with barcodes, as with penguins in Antarctica, accurately tracking them in some of the world's harshest environments.

Meanwhile, bar code technology continues to evolve. For example, Pavlidis and others have developed two-dimensional bar codes (shapes, not just lines) that yield more information in a compact form. Researchers also are working on radio frequency identification tags, which can be read from greater distances.