What do dish soap, an ancient question, a team of mathematicians and their ingenious proof of the Double Bubble Conjecture have to do with solving 21st century optimization problems? Plenty. 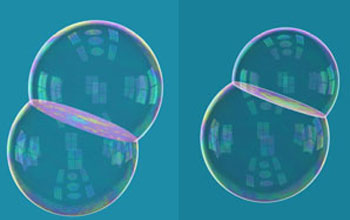 Side-by-side images of double-bubbles of (a) equal and (b) unequal volume chambers.

Ask Frank Morgan, a leading researcher in optimal geometry, "What happens when one soap bubble likes another soap bubble?" and he'll answer with effervescent enthusiasm. "They meet to make a double bubble. And they always meet at angles of 120 degrees."

Although the question may sound like a riddle, it involves complex mathematics and science. Every time two soap bubbles form a double bubble, they demonstrate the best -- or optimal -- geometric figure for enclosing two separate volumes of air within the least amount of surface area. It took mathematicians centuries to arrive at the proof, which was announced in 2000. Further research using techniques from that proof could enhance our understanding of the physical properties of structures ranging in size from the nanoscale to the galactic.

Optimal geometry is concerned with geometric figures and their properties, and specifically: what shape or configuration of shapes best meets a situation's given constraints.

Throughout his career, Morgan, a professor at Williams College, has studied soap bubbles, films and double bubbles for insight into the interplay of area and volume. He and three other mathematicians -- Michael Hutchings of the University of California at Berkeley, and Manuel Ritoré and Antonio Ros of Universidad de Granada in Spain -- proved that the common double soap bubble is the most efficient structure for containing two separate volumes of air within the least amount of surface area. The National Science Foundation and the Spanish scientific research foundation DirecciÓn General de InvestigaciÓn CientÍfica y TÉcnica supported their work.

The team's solution of the Double Bubble Conjecture was announced in March 2000 before the Undergraduate Mathematics Conference at the Rose-Hulman Institute of Technology, and has been heralded as a "mathematical milestone" by the American Mathematical Society.

"Double soap bubbles have known what they’re doing all along," says Morgan. "But it's taken us since the geometry of Euclid and Archimedes to prove it."

Ultimately, the proof of the Double Bubble Conjecture was gained by the team’s use of novel instability and rotation arguments, and built upon earlier research accomplishments by distinguished mathematicians as well as undergraduate students mentored by Morgan in the 1990s.

Morgan describes the team’s instability argument, stretching and shrinking the bubble like Silly Putty in a way to preserve the volume constraints but decrease the surface area: "Our method involved rotating the bubble, half one way and half the other way, dividing it in half very carefully so that where you split it in half, the bubble is already going in the direction of the rotation, so it just stretches it instead of breaking it."

Soap films and bubbles are examples of what mathematicians refer to as minimal surfaces or area-minimizing shapes. When a bubble wand is dipped into a soapy solution, the soap film that forms is a surface that spans the given curves with the least area. This is why individual soap bubbles are always round. The surface tension of the soap film and the air pressure inside reach equilibrium by virtue of the bubble adopting the shape of a sphere, the geometric figure with the least surface area for a given volume.

The Double Bubble Conjecture is an example of what mathematicians call a problem in "calculus of variations": finding the best configuration that maximizes or minimizes some quantity given geometrical constraints. The range of applications of such methods is enormous, and has a famous history that includes the story of Queen Dido’s Problem (see sidebar).

Scientists commonly observe that nature often seems to work along optimization principles -- trying to get the most benefit for the least cost, preferring solutions that minimize the use of energy and materials. The team's proof provided fresh evidence that nature holds key insights for solving the world’s future optimization problems.

"Optimization problems are universal and extremely complicated," says Morgan. "If you think about it, that's what we human beings work on doing -- trying to maximize profit or enjoyment while minimizing time, energy, or suffering. What math shows us is that any problem can be viewed geometrically. The way to understand things is to investigate the underlying principles and look at simple examples like the soap bubble."

Mathematicians believe that the insights provided by the proof of the Double Bubble Conjecture and their further investigations of optimal geometry have much to contribute toward helping us solve other essential questions -- such as how can we best design new materials, what are the optimal mechanisms of cellular transport, what efficiency secrets can we learn from the growth patterns of crystals, what is the optimal configuration of an information network, how are black holes structured and how do optimization principles affect the shape of the universe?

"Whether it's soap bubbles or materials or black holes or human cells -- these structures meet in certain ways. So we ask -- how do they fit, how do they pack, on the very small scale and on the very largest of scales. To solve the minimization problems of humanity, we start with a simple example, and that’s hard enough," says Morgan.

An early example of the ingenious application of calculus of variations is found in Queen Dido's problem, recounted by the Roman poet, Virgil (70-19 BC), in his epic Aeneid. After her brother had her husband killed, Dido fled her native city of Tyre (an area of present-day Lebanon) with a number of followers and reached Carthage in North Africa. There, she sought to buy land from the local inhabitants. They struck a bargain allowing Dido to purchase for a fixed price all the land that she could enclose within a bull's hide. To maximize her land acquisition, Dido had the bull's hide cut into thin strips and the strips then sewn into a long ribbon. She placed this ribbon on the ground in the shape of a semi-circle that started and ended with a straight segment of the seacoast. Since the coast length was added to the ribbon length, Dido was able to enclose more land than if she had used the available ribbon length to enclose a circle or square.

Dido had solved a question known to mathematicians as the "isoperimetric theorem": what figure bounded by a line contains the most area within a given perimeter. As Dido showed, the answer is a semi-circle. Though known to the ancient Greeks by 900 B.C., the theorem went without a rigorous mathematical proof until the mid-1800s.
-- MB