What factors enable children to be successful in school? 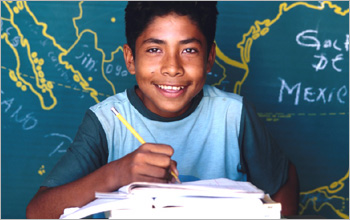 How do some children manage to do well in school, even if they come from backgrounds that underperform academically on average?

"The important term here is "on average," says researcher Catherine Tamis-LeMonda. "Within all ethnic and immigrant groups there are children who are strong academic performers and others who are not. We are studying factors in a child's life that contribute to success, as well as those that create barriers to success."

By 2040, it is projected that the majority of U.S. children will be non-white, and in the largest U.S. cities, such as New York, this is already the case. Yet very little research has been conducted with children from culturally diverse backgrounds to find out what promotes school readiness and academic success.

The Center for Research on Culture, Development and Education (CRCDE) housed at New York University is working to fill the gap. Funded by NSF since its formation in 2002, the Center is co-directed by Catherine Tamis-LeMonda, Diane Hughes, Niobe Way, and Hirokazu Yoshikawa.

To better understand the factors that promote school readiness and academic achievement, the researchers have undertaken two concurrent longitudinal studies over three years, one targeting early childhood and the other adolescents. The early childhood study begins at birth, with researchers recruiting families at maternity wards of hospitals. The adolescent study recruits middle-school children from several schools throughout New York City.

"These five contexts are affecting children's development, their ideas about who they are and what they are capable of doing, and are already exerting important influences from the moment a child is born, if not before," Dr. Tamis-LeMonda explains. "These factors will ultimately affect children’s academic performance and approach to school."

Recognizing that many research instruments have been developed based on white, middle-class children, CRCDE researchers are going "back to the drawing board" to devise entirely new, culturally sensitive methods to identify successful outcomes for the children of tomorrow. They devoted the first year of their project to performing an in-depth ethnographic study of families from all five ethnic groups. Researchers repeatedly spent full days with the families over a period of 6 months, following them to daycare, to the grocery store and to school.

"We accumulated many hours of interviews in an effort to better understand the experiences that are important to development within each of the groups we are studying," the Principal Investigators explain. "The knowledge gained from that first ethnographic year is informing our larger study. We are not using culturally biased measures."

Early results from the CRCDE's pilot ethnography and research reveal:

The CRCDE is effectively training a new generation of scholars, especially those from underrepresented minority groups, who are capable of working with immigrant families in their native tongues. Training is multi-disciplinary and scholars working at the Center include those from the fields of psychology, sociology, education, public policy, and economics.

In the long run, understanding cultural differences in children's learning will play a crucial role in achieving the CRCDE's core mission: identifying pathways to academic success.

Related Awards
#0218159 Center for Research on Culture, Development and Education