Of Microbes and Mars 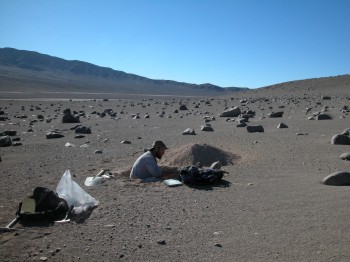 Researchers have discovered life beneath the parched surface soil of one of the driest places on earth—Chile's Atacama Desert.  Their finding may influence how scientists look for life in a similarly extreme location—Mars.

In truth, the similarities between the Atacama and Mars are striking.  The surface of Mars has apparently been dry for millions or even billions of years.  But the driest "absolute desert" region of the Atacama is not much moister; it rains there maybe once every other decade, though nobody bothers to measure it.  In fact, the desiccated vista of dirt and rocks is so Mars-like that NASA uses the area as a model for the Red Planet.

Yet despite its inhospitable qualities, a team of Arizona scientists has discovered microbial life about a foot below the rough terrain. "We found life, we can culture it, and we can extract and look at its DNA," said Raina Maier, an environmental microbiologist at the University of Arizona in Tuscon and co-author of the work.

This finding, published as a letter in the November 19, 2004 issue of the journal Science, contradicts a previous report asserting that the Atacama's absolute desert is too dry to support life and is essentially sterile.

In some ways the discovery was a happy accident.  When Julio Betancourt, a U.S. Geological Survey paleoecologist and Jay Quade, a geoscientist from the University of Arizona set off for the Atacama in 2002, they weren't specifically looking for present-day life.  Rather, they were attempting to reconstruct the history of plant communities that might have lived in the region long ago.

That was a challenge, to say the least.  Plants inhabit parts of the Atacama, but in the driest region there are no remnants of vegetation whatsoever-not even plant fossil remains.  So Betancourt and Quade were looking for more subtle evidence: chemicals that long-gone plants might have left behind in the soil.  They found trace amounts of carbonate—a signature mineral that is often, but not always produced biologically.

After some analysis, Betancourt and Quade doubted the soil carbonate they uncovered came from plants, and began to look for other sources.  To explore the possibility that microorganisms produced the soil carbonate, the geoscientists teamed up with microbiologist Maier.

After working with her group to craft a detailed protocol for sample collection, the team returned to the Atacama and obtained numerous soil specimens from a 120-mile wide stretch of desert.  They were careful to avoid contamination of the soil with outside microbes-both during sample collection and transport back to Maier's lab in the United States.  The caution was warranted because although Maier believed the team would uncover microorganisms, she assumed the population would be small.  "The desert supports low numbers of microbes, so it's important to make sure you are not contaminating them," Maier says.

The payoff—and the excitement—came back in Arizona, after graduate student Kevin Drees incubated each sample in sterile water for several days, and then spread them on to nutrient-rich Petri dishes for growth.  All of the specimens produced active bacteria and Drees was able to extract DNA from them.  According to an enthusiastic Betancourt, "The soil had life in it"—even in samples that came from the driest sector of the desert.

Back home in the Atacama, Maier speculates, these organisms most likely lived in suspended animation between desert rains; moistening the samples probably "allowed dormant organisms to wake up," she says.

Maier and colleagues haven't identified the organisms just yet, but they intend to.

Maier attributes her team's success to a number of factors, including careful planning, and their sampling and processing strategy.  She candidly admits that, "Finding life in extreme environments is both art and science and requires patience for success."

Certainly that's a good take-home message for Mars exploration-where trace amounts of carbonate have also been detected.    This team's findings suggest that how researchers search for evidence of life on the Red Planet may affect whether they find it or not.

For example, other researchers who tested the Atacama soil for life only sampled at a depth of 4 inches below the soil surface.  By contrast, the Arizona team dug 8 to 12 inches below the soil to avoid the desert surface's desiccating dryness, penetrating UV rays and high winds.  Digging deeper was likely the key factor in their success.

According to Quade, the process was a "warm-up for Mars Rovers" and may "set the ground rules for what to sample."

Maier concurs, adding that the pursuit of life on Mars, "requires multiple approaches and multiple teams with different perspectives on how to find life."

Next up for the team is to verify that the organisms they cultured can produce carbonates and become activated by water.  This may include a return visit to Chile for on-site experiments.  One option is to monitor the Atacama's soil for microbial activity after simulated rain events.

And of course, there is always the possibility of fresh surprises.  "Science is not formulaic," says Betancourt.   "Once you start putting a team on a project, fascinating things may happen."  He adds, "The Atacama is an incredible place to be really creative."

Related Awards
#0133237 Fundamental Studies of In Situ Biosurfactant Production and the Attendant Impact on Metal Interactions with Soil Surfaces
#0213657 Collaborative Research: Past and Modern Variability of Summer and Winter Rainfall on the Pacific Slope of the Central Andes (Chile)