Voyage to the Center of the Sun

The Sun "rings" like a bell---which lets GONG probe its deepest secrets. 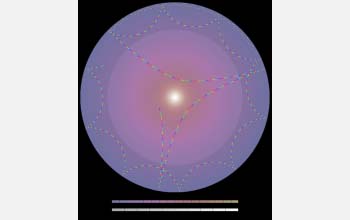 Sound waves bouncing through the Sun.

From our vantage point here on the ground, the Sun is the source of warmth, light and life. But from a cosmic perspective, the Sun is the center of the solar system: the fixed point around which the Earth and all the other planets revolve. It also just happens to be the closest star to the Earth--a mere 150 million kilometers away, which is right next door on the interstellar scale. And for that reason, astronomers view the Sun as their key to understanding the structure and evolution of stars everywhere--and, by extension, of galaxies and the universe.

Like other stars, for example, the Sun is essentially a vast thermonuclear fusion reactor held together by gravity. Deep in its interior, where the temperature and pressure climb to almost unimaginable levels, some 600 million tons of hydrogen are fusing into helium every second--in the process, producing energy that's radiated from the incandescent outer layers of our star as sunlight. The question is, how?

In the past, astronomers always had a tough time answering that question in any detail, mainly because those same incandescent outer layers make it impossible for them to see what's going on below. Recently, however, NSF-supported scientists have been looking right through the surface and mapping the inner dynamics of the Sun with remarkable clarity, thanks to a technique known as "helioseismology."

The trick is to study the Sun by analyzing the sound waves traveling through it, explains John Leibacher, an astronomer at the National Optical Astronomy Observatories in Tucson, Ariz., and director of the NSF-funded Global Oscillation Network Group (GONG). Much as the waves produced by earthquakes and explosions roll through the Earth, he says, these solar sound waves pass through the Sun's gaseous mass and set its surface pulsating like a drumhead. With six telescopes set up around the Earth collecting data every minute, GONG scientists can measure these pulsations, and thus learn about the Sun's structure, dynamics and magnetic field.

Analysis of data from GONG and other sources shows that current theories about the structure of the Sun need to be expanded. For example, the convection zone--the region beneath the Sun's surface where pockets of hot matter rise quickly and mix violently with ambient material--is much larger than originally thought. Furthermore, says Leibacher, the zone ends abruptly. "There is turbulent mixing and then quiet. We can locate the discontinuity with great precision." Some research teams are probing deeper and examining the Sun's core; still others are addressing such topics as sunspots—places of depressed temperature on the surface where the Sun's magnetic field is particularly intense.

New insight into the Sun's core came in the spring of 2000, when NSF-funded researchers analyzing GONG data announced that they had discovered a solar "heartbeat." That is, they'd found that some layers of gas circulating below the sun's surface speed up and slow down in a predictable pattern--about every 16 months. This pattern appears to be connected to the cycle of eruptions seen on the Sun's surface.

Such eruptions can cause significant disturbances in Earth's own magnetic field, wreaking havoc with telecommunications and satellite systems. A major breakthrough in the ability to forecast these so-called solar storms came in the spring of 2000, when NSF-funded astrophysicists, using ripples on the Sun's surface to probe its interior, developed a technique to image explosive regions on the far side of the Sun. Such images should provide early warnings of potentially disruptive solar storms before they rotate towards Earth.