It had long been assumed that circular nozzles, such as those used by ink-jet printers to deposit tiny droplets of ink, were the best shapes for the job. Now, mathematicians at Harvard University have shown that triangular may be the way to go. 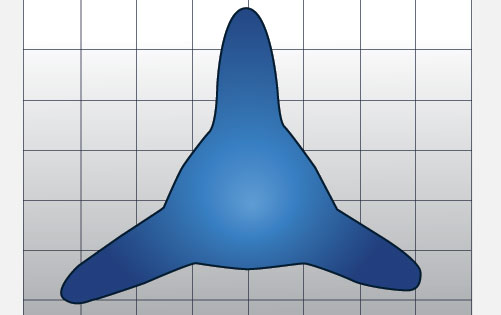 The optimal shape of the faucet opening.

Circles have a certain mathematical elegance and simplicity, which in real-world applications can be deceiving. For example, you hardly ever see a square pipe or hose. From the plumbing in your house to the massive concrete pipes in sewage systems, a cylindrical pipe is easy to manufacture as well as the best shape to keep the water (or other fluids) moving.

A similar assumption has largely carried over to the ends of pipes, such as the faucets in your bathroom sink or the circular nozzles used by ink-jet printers to deposit miniscule droplets of ink on paper. Until recently, it had long been assumed that a circular nozzle was the best shape for the job if you wanted to make smaller and smaller droplets.

Now, however, graduate student Henry Chen and Michael Brenner, the Gordon McKay Professor of Applied Mathematics and Applied Physics at Harvard University, have shown that design engineers should be thinking outside the circle, so to speak.

In fact, triangular may be the way to go.

"Lots of designs can be improved by making subtle changes them," Brenner said. "Simple calculations can go a long way." But there's been a disconnect, he added, between the mathematics community and the design engineering field.

Using a mathematical optimization procedure they developed, Chen and Brenner reported in the April 23, 2004, Physical Review Letters that tweaking the shape of a circular nozzle will always give you a better nozzle. The best shape they found for making smaller droplets turned out to be a sort of sucked-in triangle. Other factors being equal, the triangular nozzle can cut the droplet size by 21 percent compared to a circular nozzle.

The project's major significance is to demonstrate what design engineers could accomplish. "Mathematics can affect real things," Brenner said. However, "this nozzle will not appear in your ink-jet printer any time soon." Ink-jet manufacturers have used processes different from the one modeled by Brenner and Chen -- changed the plumbing rather than the faucet -- to achieve ever-smaller droplets.

An earlier collaboration between Brenner and MIT engineering professors Alex Slocum and Jeff Lang, for example, looked at the shape of a switching element in a microelecromechanical system (MEMS) -- an integrated circuit that contains both electronic components and microscopic machines such as valves and motors. By modifying the shape of the switching element, the team described in the Aug. 19, 2003, Proceedings of the National Academy of Sciences how they were able to improve the switch's performance.

The methods developed by Chen and Brenner to address the nozzle problem are of general use in design engineering for optimizing the shape of other mechanical objects. The calculations required have been rendered much more feasible over the past few years by the emergence of powerful and reliable mathematical software.

"The idea of using mathematics is a very good one with lots of potential," Brenner said. "The major challenge is to make the connection with the designers."