Scientists have uncovered glyphs and plaque fragments with what is believed to be the earliest form of writing ever found in the New World. The artifacts challenge previously held notions about the first Mesoamerican system of written communication. 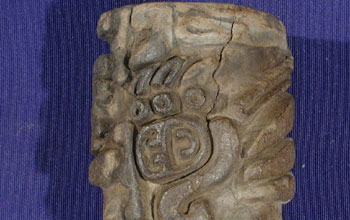 Scientists have uncovered evidence of what is believed to be the earliest form of writing ever found in the New World. The discovery was based on glyphs carved on a cylindrical seal used to make imprints and on greenstone plaque fragments found near La Venta in Tabasco, Mexico, in the Gulf Coast region. The writings were produced by the Olmecs, a pre-Mayan civilization, and are estimated to date from 650 B.C.

The artifacts, which push back the date for the first New World writings about 350 years, challenge previously held notions about the earliest of Mesoamerican peoples who developed the first system of written communication.

"It was generally accepted that Mayans were among the first Mesoamerican societies to use writing. But this find indicates that the Olmecs' form of written communication led to what became forms of writing for several other cultures," said John Yellen, an archaeologist and NSF's program manager for the research.

Excavations led by Mary E.D. Pohl of Florida State University, resulting in the discovery of the Olmec writings were conducted at San Andrés, near La Venta in 1997 and 1998. Her team included colleagues Kevin O. Pope of Geo Eco Arc Research, Christopher von Nagy of Tulane University and four students, three American and one Dutch. Pohl's team worked for several years beyond the initial excavations to analyze, refine and confirm the estimated date of the Olmec writings.

"We knew we had found something important," said Pohl, whose research was funded primarily by NSF. "The motifs were glyph-like, but we weren't sure at first what we had until they were viewed more closely."

Scientists had previously discovered related hieroglyphic scripts and an associated "sacred 260-day calendar" among the people of the Mayan, Isthmian and Oaxacan regions in the Late Formative period (400 B.C. to A.D. 200). These peoples came from areas around the Gulf Coast region across wide areas of eastern and southern Mexico surrounding the gulf.

Describing the findings in the journal Science in 2002, Pohl suggested that these writings and calendric systems "have close similarities, indicating that they probably came from a common ancestral script." These ancestors, the Olmecs, appear between 1300 B.C. and 400 B.C., considered the Formative period of Mesoamerican history.

"The connection between writing, the calendar and kingship within the Olmecs is indicated in these communications, dating to 650 B.C., which makes sense, since the Olmecs were the first known peoples in Mesoamerica to have a state-level political structure, and writing is a way to communicate power and influence," Pohl said.

Pohl's group found one of the indicators of this political system as they excavated through a rare sampling of Olmec refuse debris that included human and animal bone, as well as objects such as food-serving vessels, hollow figurines and the cylinder seal and greenstone plaque fragments containing the evidence of Olmec writings.

One of these writings contained the glyphic element determined to be close to early Mayan counterparts representing the day sign "ajaw," or "king." The scientists interpreted part of the glyphic inscription to contain the word "3 Ajaw," the name of a day on the 260-day calendar, which could also represent the personal name of a king. Whether or not the interpretation is entirely accurate, Pohl said that the evidence suggests association between writing and "rulership." The cylinder seal, for example, was probably used to imprint clothing with the King 3 Ajaw symbol. Clothing and jewelry were important items, Pohl said, to show rank and status in the Olmec society and the connection of minor nobility at San Andrés to the rulers at La Venta.

And what happened to the Olmecs?

"It is unclear, but at least in the lowland region of the Tabascan coastal plain where we conducted our research, flooding due to changing courses of rivers over time led to the abandonment of the Olmec settlement at San Andrés and probably other sites in this area," Pohl explained. "It is possible, too, that the Mayans increased their power and came to dominate, taking over trade routes, leading to the end of the Olmecs as we know it."

Other funding for the research by Pohl and colleagues came from the Foundation for the Advancement of Mesoamerican Studies, Inc. Support was also provided by Brigham Young University's New World Archaeological Foundation and Mexico's National Institute of Anthropology and History (Instituto de Antropologia e Historia).