Physicists have probed the properties of whole atoms of antimatter, the "mirror image" of matter, providing the first look inside an antimatter atom and taking a big step on the way to testing standard theories of how the universe operates. 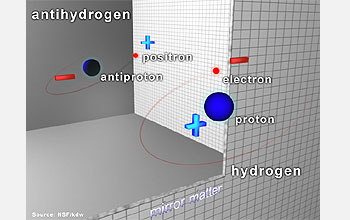 An illustration of Hydrogen atom and its antimatter mirror image.

It seems like the stuff of science fiction, but NSF-sponsored researchers working at CERN, the European Organization for Nuclear Research, have probed the properties of whole atoms of antimatter, the "mirror image" of matter, for the first time. Their results provide the first look inside an antimatter atom and are a major step on the way to testing standard theories of how the universe operates.

Because anti-particles disappear in a flash of energy the instant they come in contact with matter, antimatter is notoriously hard to handle. Fast-moving or "hot" antimatter has been created for years, but previous hot anti-atoms were annihilated by collisions with matter before they could be studied.

In 2001, the ATRAP (for Antihydrogen Trap) team led by Gerald Gabrielse of Harvard University, announced they had slowed down negatively charged antiprotons and combined them with slow positrons, the positively charged antimatter equivalent of electrons, to create an environment for forming the simplest possible anti-atom: antihydrogen.

Next, the ATRAP team took their hard-won anti-atoms and ripped them apart to make the first measurements of a complete antihydrogen atom. The researchers placed the anti-atoms in an electric field, which they tweaked until the atoms were torn asunder; the strength of the field required indicated how tightly the anti-atoms were held together.

"It's like putting the anti-atom next to a battery," Gabrielse explained. "The antiproton would be attracted to one terminal and the positron would be drawn to the opposite one."

These first measurements, reported in the November 2002 Physical Review Letters, didn't indicate a difference in the way antihydrogen and hydrogen are put together, but Gabrielse said to detect differences they'll need to measure anti-atoms in a more "normal" state.

Although the anti-atoms they've studied moved slowly, their positrons were still excited to unusually high levels. The researchers' next step is to "de-excite" the anti-atoms so they can make comparisons to the physics of normal hydrogen atoms.

According to Gabrielse, almost everyone expects the properties of hydrogen and antihydrogen to be the same. Detecting differences, he said, would be "the biggest discovery in physics in decades" and would "require scientists to reformulate the most basic laws of physics."

Current theories predict that the universe could just as easily be made of antimatter as of matter, but don't explain why our universe is made up exclusively of the latter. If the researchers find small differences in the properties of matter and antimatter, they would contradict the present paradigm and might help solve the riddle. NSF program manager Denise Caldwell from the physics division of says the ATRAP work is "the critical first experiment in the search for differences between matter and antimatter using antihydrogen."

Gabrielse doesn't expect the study of anti-atoms to yield new applications, but he pointed out that their cutting-edge studies have produced technology that improves everyday life. Magnetic traps used to hold antiparticles are now used in analyzing pharmaceuticals, and the superconducting magnets they've patented can be used in magnetic imaging. As Gabrielse put it, "If you push reality really hard, good things always come out of it."

The National Science Foundation has sponsored the research leading up to this seminal experiment for 15 years. Gabrielse is joined in his efforts by ATRAP team members from Harvard University, the Forschungszentrum Jülich, CERN, the Max-Planck-Institut für Quantenoptik in Garching, the Ludwig-Maximilians-Universität in Munich and York University.