Studies on common baker's yeast have led to the discovery of what may be a long-sought mechanism in the life cycle of retroviruses, a finding that could help pinpoint targets for new classes of drugs to fight HIV. 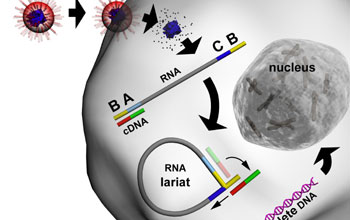 The RNA lariat structure identified by Tom Menees at the University of Missouri-Kansas City.

Studies on common baker's yeast have led to the discovery of what may be a long-sought mechanism in the life cycle of retroviruses, including the human immunodeficiency virus (HIV). Knowing the details of this step in the infection process could help pinpoint targets for new classes of drugs to fight HIV.

Thomas Menees and Zhi Cheng of the University of Missouri, Kansas City, described the formation of a lariat structure with the genetic material of retrovirus-like elements in baker's yeast and subsequent cutting of the lariat by a yeast enzyme. The findings, reported in Science and in the Journal of Virology, are the payoff of a three-year research gamble by Menees and two postdoctoral researchers pursuing host-cell factors in retroviral infections.

In addition to filling a gap in biologists' understanding of how retroviruses replicate, it may turn out that similar lariat structures occur elsewhere in healthy cells and play previously unrecognized roles in cellular processes such as gene activation.

"The work of Menees and his collaborators fills a real void in our understanding of how retroviruses propagate and how genetic information is faithfully copied," said Patrick Dennis, program director for microbial genetics at NSF, which supported the research. "The RNA lariat provides a plausible mechanism for a key step that has remained a mystery since the process of reverse transcription was first presented almost 35 years ago."

The 1975 Nobel Prize in Physiology or Medicine was awarded to David Baltimore and Howard Temin, in part, for describing how retroviruses replicate. The genomes of most organisms are encoded in DNA, which is transcribed into single-stranded ribonucleic acid (RNA) and then translated into proteins. The genome of a retrovirus, on the other hand, starts as RNA, which must first be converted into double-stranded DNA. Early in this process, the partially built DNA has to shift from one end of the RNA strand to the other end. Subsequent research confirmed that this so-called "template shift" does in fact occur, but the precise mechanism has never been identified.

"The structure of the lariat was very provocative," Menees said. "It is perfectly positioned to support template shifting. In addition, the lariat fits with data that were already out there and helps explain some other anomalous data on retroviral DNA."

While circumstantial evidence suggests the RNA lariat is the missing link, Menees is careful to point out that further work is needed to show that retroviruses actually use the same host-cell enzyme and the lariat structure to replicate.

He surmises that the lariat structure had escaped detection for so long because of its transient nature. As the RNA is being transcribed into DNA, another part of the viral machinery "chews up" and destroys the RNA.

"The new results provide remarkable new insights into the process of reverse transcription of virus-like RNA into DNA," said Stephen Goff, Higgins Professor of Biochemistry and Molecular Biophysics and Microbiology at Columbia University, who saw Menees present the lariat findings at a scientific meeting in May 2003. "The possibility that there are new players in the process of transposition is very exciting. If it is confirmed that the same enzyme is required for HIV-1 replication, there is little doubt that a new aspect of virus replication will be targeted for drug intervention."