The ease with which people's memories can be distorted is disconcerting. 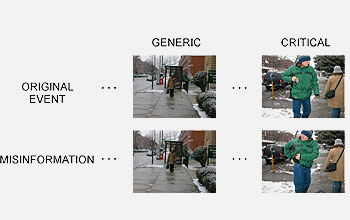 Sample stimuli used in the experiment. While many items are the same, a detail is changed in the ...

Forgetting is a common, if bothersome, behavior of the human memory system. The benign loss of information is usually forgiven. Memory that is not lost but is instead distorted may not be so benign.

For example, one may have a memory of an important event such as a wedding day, the birth of a child or even a traumatic event such as September 11, 2001. However, such memories are likely distorted to some degree. These distortions, or false memories, manifest themselves in various forms, from changes in the source of a memory (for example, believing that a piece of news came from a television program rather than from a friend) to changes in the content of the memory itself (for example, believing a criminal carried a gun rather than a knife).

"These distortions are usually not a problem," says psychologist Craig Stark of Johns Hopkins University, "as the world is a pretty consistent place. Normally, it's safe to incorporate bits and pieces from different memories into a single cohesive memory. It's a lot more efficient and usually doesn't cause a real problem."

False memories are created in various ways. In the "misinformation effect," people who see one version of an incident and then are presented with a second version will often recollect the altered version as correct. For example, if witnesses to a crime are later given a description in which key details of the crime are altered – for example, a car stops at a stop sign in one version and a yield sign in the other – they often remember having originally seen the altered event.

The misinformation effect may arise in a criminal investigation if repeated questioning inadvertently suggests a certain outcome or contains misinformation. Further, research has shown that people can easily integrate memories from multiple events into what they believe is a memory for a single event.

With NSF support, Stark and Yoko Okado from Johns Hopkins used functional magnetic resonance imaging (fMRI) to understand how this misinformation effect works. In particular, they wanted to know what the misinformation effect can tell us about how false memories originate and what this might tell us about memory processes that lead to both true and false memories of events.

In their study, participants first viewed 50 slides from eight vignettes, depicting events ranging from robberies to college friends waiting for class. Each vignette contained 12 critical items, such as a left-handed robber or a student studying for a psychology exam. Shortly afterwards, participants again viewed the same vignettes but with changes to all 12 critical items – this time the robber was right-handed and the student was studying for a statistics exam, for instance.

This study highlights the critical role of neural activity in particular brain regions during an event for determining whether a memory will be accurate or susceptible to distortion. Scientists can then improve their understanding of how memory distortions occur, with implications for situations ranging from eyewitness testimony to recovered repressed memories to the simple distortions that occur in our everyday lives.

"These distortions are showing us that our brain may only store fragmented, compressed bits of information," Stark says. "When we retrieve that information, we expand it into a cohesive memory based on what information we're able to retrieve, potentially leading to these false memories. Of course, once you've reconstructed it incorrectly once, you're probably going to do it again, as that reconstruction probably gets stored away so that next time, you may just retrieve it and misattribute its source."
-- Elizabeth Malone