Scientists Use Seals as "Underwater Eyes"

By employing Weddell seals as "spies" through novel use of technology, Antarctic researchers have gained new insights into the behavior of two little-known fish species. 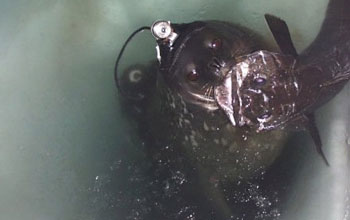 A Weddell seal equipped with "seal-cam."

By employing one underwater species to "spy" on two others through novel use of technology, Antarctic researchers have gained new insights into two little-known fish species. The team equipped Weddell seals with video cameras to follow the fish and record their behavior.

The fieldwork by an eight-member team at McMurdo Station in Antarctica provided a rare glimpse into the habits of two very important Southern Ocean species, the Antarctic silverfish and the Antarctic toothfish, which is prized by commercial fishing fleets. It could also have wider applications in studying other species that thrive at great depths, the researchers said.

To obtain the images and data over the course of three Antarctic summers, Lee Fuiman of the University of Texas at Austin, Randall Davis of Texas A&M University, Galveston, and Terrie Williams of the University of California, Santa Cruz, equipped 15 Weddell seals with a video camera, infrared LEDs and data recorders to track both the seals' movements from their breathing holes through the water and their interactions with their prey.

"This use of a marine predator as a guided, high-speed sampling device for its midwater prey provided clarification and new insights into the behavior, interactions, and ecology of species that have been especially difficult to study," they wrote in reporting the results of the NSF-supported work in Marine Biology. "This new information expands the base of knowledge of two of the most important fish species in Antarctica and indicates that some existing notions about their distribution and behavior may need to be revised."

Most prior knowledge about the silverfish and toothfish had come from a variety of indirect evidence such as trawl catches, catches on hooks and the stomach contents of predators. But the "seal cams" and data recorders allowed Fuiman, Davis and Williams to "accompany" the seals as surrogates on their hunts and to record firsthand what the seals and their prey were seeing and doing.

The team's 2002 findings shed new light on the behaviors of the two species. For example, the researchers now believe, based on the seal-cam data, that the silverfish migrate from deeper to shallower water using ambient light as a cue, even in the absence of a sunset during the Antarctic summer. In the case of toothfish, the data indicate that this species may be more common at depths less than 200 meters (656 feet) than previously thought.

"Nevertheless," the researchers wrote, "our few observations of [silverfish] under the thicker permanent ice shelf suggest that light intensity may not be the only determinant of vertical position." More observation is needed to see if other factors, such as the distribution of predators or prey, which also may respond to the amount of ambient light, also play a role in species distribution.

Although their data were gathered in Antarctic waters and the researchers acknowledge that all data sampling techniques have their limitations, the "seal cam" technique has promise and "could be used to study other pelagic and deepwater fishes and invertebrates that are otherwise impossible to observe in their natural environment."