Young Birds' Flapping May Explain How Dinosaurs Learned to Fly

Two-legged dinosaurs may have used their forelimbs as wing-like structures to propel themselves up steep inclines long before they could fly. This theory may link two current and opposing explanations for how reptiles evolved into flying birds. 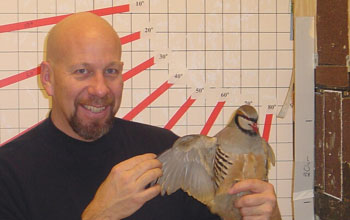 Two-legged dinosaurs may have used their forelimbs as wing-like structures to propel themselves rapidly up steep inclines long before they took to the skies, according to studies by University of Montana biologist Kenneth Dial. The new theory adds a middle step that may link two current and opposing explanations for how reptiles evolved into flying birds.

In 2003, Dial suggested that the transition from ground travel to flight may have required a "ramp-up" phase in which rapid movement of the animal's front appendages actually forced its body downward to gain more foot traction as it made its way up increasingly vertical slopes.

"The big dilemma has been, 'How do you explain the partial wing?'" said Dial, a professor of vertebrate morphology and ecology. "It turns out the proto-wings -- precursors to wings birds have today -- actually acted more like a spoiler on the back of a race car to keep the animal sure-footed even while climbing up nearly vertical surfaces."

"The development and role of movement in animals is critical to every aspect of their lives," said William Zamer of NSF, which funded the study. "The results may also one day help humans design better vehicles for both land and air travel."

The evolution of flying vertebrates has been a bone of contention since the 1800s. One school, which embraced the cursorial theory, argued that two-legged, ground-dwelling animals developed feathered wings that allowed them to become airborne. The opposing school, which favored the arboreal theory, held that flight originated in tree-dwelling animals that leapt from limb to limb and eventually developed gliding structures to soften their landings. For a century-and-a-half, each camp has tendered evidence to challenge the opposing theory.

The solution, Dial said, may lie in an ordinary flapping behavior, which he calls "wing-assisted incline running," or WAIR, found in many modern-day hatchling and adult birds. "Although this behavior is common in nature," he reported in the journal Science, WAIR's role in the evolution and survival of birds "has remained unappreciated" because it happens in short bursts that are difficult to study in the wild.

So, Dial, who is also a licensed commercial an instrument-rated pilot, applied to partridges devices that sensed g-force and used high-speed film to document wing orientation in a laboratory setting. He found that newly hatched birds, yet unable to fly, successfully used WAIR to climb a 50-degree incline. Slightly older birds used WAIR to climb a 90-degree, or straight-up, surface, and adult birds used their wings literally to defy gravity. Wing flapping kept their bodies secured to the underside surface of a 105-degree overhang.

"A significant portion of the wing beat cycle involves ... forces that push the bird toward the inclined substrate, permitting animals to run vertically," Dial observed.

Dial proposed that WAIR in modern-day birds is a remnant of their prehistoric ancestors. "In the proto-bird, this behavior would have represented the intermediate stage in the development of flight-capable, aerodynamic wings." Further re-orientation of the wings could then allow birds to make successful ascents into the air as well as safe landings.

Experts believe birds evolved from a common ancestral protoavis dinosaur some 225 million years ago during the Mesozoic era. As the continental land mass broke apart, birds inhabited all corners of the Earth. While most bird species were wiped out with the dinosaurs 65 million years ago, many scientists consider birds the only true living relative of the dinosaurs.