In December 2003, the United States, Russia and China announced the start of operations for the first round-the-world computer network ring. The ring involves the first-ever fiber network connection across the Russia-China border. 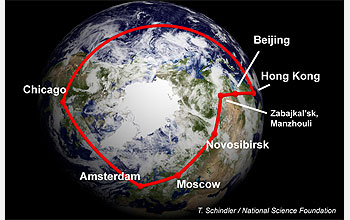 The image shows the route of the Little GLORIAD network.

In December 2003, NSF, a broad consortium of Russian ministries and science organizations and the Chinese Academy of Sciences (CAS) announced the start of operations for the first round-the-world computer network ring, which will be used for joint scientific and educational projects. Completing the ring involved increasing the bandwidth between the United States and China and making the first-ever fiber network connection across the Russia-China border.

The new network will provide both increased reliability and flexibility for researchers as they address scientific issues including joint responses to natural and man-made disasters, safeguards for nuclear materials, better understanding of the human genome, joint exploration of space, distributed monitoring of seismic events and environmental studies and simulations. The network will also enable cooperation on international fusion energy research and support the advanced requirements of high-energy physicists.

"As part of the international community of science, we share common concerns that reach across national borders," said then-NSF Director Rita Colwell. "As we all aim to strengthen our nations' capabilities in research, we also aim to contribute to the cumulative knowledge that lifts the prospects of people everywhere. This new network serves as both a physical and symbolic reminder of our common goal of solving problems and building a world of peace and prosperity."

Known as Little GLORIAD, the ring "begins" in Chicago at the NSF-supported StarLight facility, managed by the University of Illinois at Chicago and Northwestern University. The network crosses the Atlantic Ocean to the NetherLight facility in Amsterdam from which it continues to Moscow, then to the Russian science city of Novosibirsk, across Siberia to the border at Zabajkal'sk. After crossing the border to Manzhouli, the network continues to Beijing, then Hong Kong and crosses the Pacific Ocean to complete the ring in Chicago.

Little GLORIAD is being funded in part by a $2.8 million NSF grant to the National Center for Supercomputing Applications (NCSA) at the University of Illinois at Urbana-Champaign. Russian support for Little GLORIAD is provided through a consortium of government Ministries and science organizations coordinated by the Russian Research Center (RRC) "Kurchatov Institute" and the Russian Ministry of Industry, Science and Technology. Chinese support from CAS and through CNIC, which coordinates China-wide networking for CAS, was finalized with an agreement signed November 12, 2003, among CAS, the University of Illinois and Tyco Telecommunications, which is providing the U.S.-China and U.S.-Europe bandwidth across its Tyco Global Network.

As the name suggests, Little GLORIAD is a first step towards a higher-speed network -- GLORIAD, shorthand for Global Ring Network for Advanced Application Development -- that the three countries are jointly developing for a mid-2004 start. GLORIAD is proposed to be a 10-gigabit-per-second optical network around the entire northern hemisphere.

The U.S. leaders of the effort, Greg Cole and Natasha Bulashova of NCSA, have been operating U.S.-Russian NaukaNet for science and education collaboration for five years. "Today's announcement represents an important step in the development of the larger GLORIAD network," Cole said. "This new program should further enable our scientists and educators to better communicate and cooperate with each other."

The GLORIAD network will connect Chinese and Russian scientists, educators and students to an important common interconnection point for North American research and education networks including Internet2's Abilene, the National LambdaRail, CANARIE, NASA's networks and the Department of Energy's ESnet.

The GLORIAD project's partners also include SURFnet in Amsterdam, where an experimental exchange point into the European science and education community will be established at the NetherLight facility. In addition to links to the United States and Russia, this exchange point will enable new high-speed capabilities between Europe and Asia across the Russian science and education network.