Researchers have developed a display that beams full-color images directly onto your retina. 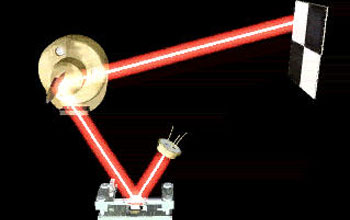 Researchers at the Human Interface Lab of the University of Washington have developed a novel display system. The device beams images directly onto the human retina, in full color and at VGA resolution (640 x 480 pixels). Using a low power laser, the device scans line after line of an image directly onto the back of the eye at such a fast rate that the complete image refreshes 72 times per second, fast enough for a movie.

The team, led by Eric Seibel, is working to develop a 3D system that scans an image into both eyes resulting in high-resolution, full color, 3D displays.

The animations depict what the researchers believe a low-vision subject will see with their assistive device. The animations were created by Quinn Smithwick of the Human Interface Technology Laboratory.