Researchers discover what triggers severe inflammation of the intestine in people with celiac sprue, a common genetic disease that, if untreated, can lead to malnutrition and worse, and they propose a potential treatment. 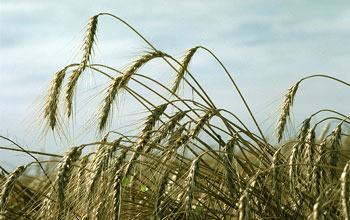 Imagine how difficult it is to follow a diet that avoids all traces of gluten, a protein found in wheat and certain other grains. That's the tough challenge people who have celiac sprue -- also known as celiac disease -- face throughout their lives. When they eat foods containing gluten, their bodies' immune systems attack the protein. Because gluten attaches to tiny, fingerlike structures called villi on the lining of the small intestine, the attackers inadvertently damage these vital protrusions. Nutrients from food are absorbed into the bloodstream through the villi, and when the villi are lost, the body becomes malnourished. People with celiac sprue are at risk of developing malnutrition, osteoporosis, cancer of the small intestine, and other disorders.

According to estimates, as many as 1 in every 200 Americans suffers from the condition, and there is no cure. The only treatment is to completely avoid anything containing gluten.

But that situation could change in the next few years, thanks to a team of researchers who have discovered the trigger and a potential treatment for the disease. Chaitan Khosla and his colleagues at Stanford University, and a group at the University of Norway in Oslo determined that the destructive autoimmune response in celiac sufferers can be traced to an unusually long molecule -- a chain of 33 amino acids --  that cannot be broken down by the human digestive system. This molecule and its close relatives are abundant in wheat, rye, and barley --  food grains toxic to celiac patients -- but not in "safe" food grains such as rice and corn. To test potential treatments, the researchers immersed the gluten fragment in enzymes derived from bacteria, and they found one that was effective in breaking the chain into pieces that can easily be digested in the gut. The researchers reported their results in the journal Science in September 2002.

"These findings are the first step to giving people with celiac disease real hope for a normal life," said Khosla, a professor of chemistry, chemical engineering, and biochemistry at Stanford who has received several NSF grants since 1993 to support his biochemical and biomass engineering research. In 1999, he was named the recipient of NSF's Alan T. Waterman Award, an annual honor that recognizes an outstanding young researcher in any field of science or engineering supported by the agency. In addition to a medal, the awardee receives a grant of $500,000 over a three-year period for scientific research or advanced study. Khosla used his grant to pursue research on celiac sprue after his wife and son were diagnosed with the disease. Lu Shan, a graduate student in Khosla's lab, was the lead author for the paper in Science.

In the lab, researchers mimicked the digestive process. In the small intestine, enzymes from the pancreas initially digest gluten by breaking it into a number of fragments called peptides. In most people, the larger peptides work their way down to the lower intestine where they are eaten by microorganisms. "But in people with celiac sprue, the stable 33-amino acid peptide causes big problems because the molecule is recognized as being a threat to the person's immune system," said Khosla.

Celiac sprue usually surfaces in early childhood when intestinal tissue begins to show signs of damage, but the disease is often diagnosed only after years of painful symptoms.

The Stanford professor and his coworkers believe their efforts could result in a new approach to treating celiac sprue. They have shown that a bacterial enzyme can break down the gluten fragment in human tissue cultures and in rats. Someday their efforts could result in a simple, oral supplement that prevents the harmful effects of gluten in people with celiac sprue. In concept, the treatment would be similar to enzyme supplements taken by people who cannot digest lactose, a sugar found in milk.

Although research is underway, an approved therapy for celiac sprue could be as many as 5 to 8 years away, according to Khosla. Small-scale clinical trials could begin within 2 to 3 years, if the U.S. Food and Drug Administration approves.