You could call Glenn King "The Spider Man." The University of Connecticut research scientist is mapping spider toxins at the molecular level. His work may result in an insecticide that takes out agricultural pests without harming other insects. 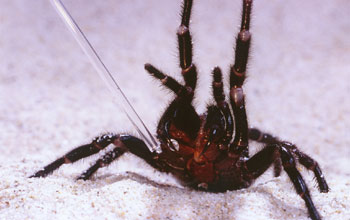 Biochemist Glenn King is searching for an alternative to chemical pesticides. King's research on insect-specific neurotoxins focuses on one the world's most efficient insect predators -- spiders.

The Blue Mountains funnel-web spider (Hadronyche versuta) -- a large Australian spider with a bite that is deadly to humans and insects -- is an ideal source of venom for King's research. The spider "cooperates" by rearing up in a fighting stance when provoked, making it relatively easy for researchers to aspirate venom directly from its fangs. Since Australian funnel-web spiders can live for more than five years in captivity, a small group of these spiders yields plenty of toxins for King's chemical analysis.

Funnel-web spider venom is a complex brew of more than 100 chemical compounds, most of which are toxic to insects, but not vertebrates. King is studying the molecular structures of the toxins that selectively target the nervous systems of insects to understand the toxins' mechanism of action at the cellular level. Because these toxins do not affect the mammalian nervous system, it may be possible to use them to create environmentally friendly insecticides.

Insect pests destroy about 25 percent of the world's crops each year, despite the extensive application of chemical insecticides since World War II. The initial effectiveness of DDT in agricultural use and malaria eradication programs led many to view chemical insecticides as a panacea. But widespread use of the chemicals has boosted insects' resistance, even to increased dosages, while the environmental damage and human health risks associated with the chemicals have increased, according to King.

"We have a very good reason to look for a safer, nontoxic, and more efficient pesticide. More than a billion pounds of pesticides are sprayed in the U.S. every year. That's four pounds per person. A millionth of a pound can sometimes be deadly. And the chemical toxins that currently end up in the food and water supply pose a serious threat to animals, fish, and birds," says King, a research scientist at the University of Connecticut Health Center.

Using nuclear magnetic resonance (NMR) spectroscopy, King and his colleagues have determined the three-dimensional structures of specific neurotoxins from the funnel-web spider -- toxins that either paralyze insects or send their nervous systems into overdrive. King's NSF-funded research has provided the first detailed descriptions of the regions of the toxins that are essential for interaction with insect ion channels. (Ion channels allow the movement of ions -- small charged molecules -- across cell membranes.)

His next challenge is to use this information to design insecticides that specifically target insect pests without affecting vertebrates. One approach is to create chemical insecticides that mimic the action of spider toxins. Many insects have developed immunity to DDT and other chemical controls because most insecticides are neurotoxins that act against only a small number of nervous system targets. King's spider-venom cocktails could be designed to thwart the resistance of specific insect pests by locking on to novel molecular targets in the insect nervous system. Because the insects have never encountered chemicals that behave like spider toxins, they will most likely lack resistance to bioinsecticides derived from funnel-web venom.

Another strategy is to insert a gene for encoding a spider toxin into viruses that are specific to a particular insect genus, or even a small number of species within a genus. The toxin-enhanced virus would act like a magic insecticide bullet, targeting only cotton bollworms, for example, and leaving bees and other beneficial insects unharmed. Unlike some conventional insecticides, the toxins used in the engineered virus would not end up in the food supply.

Recent laboratory research on cockroaches and tobacco budworms demonstrates that the toxins can disrupt the insects’ nervous systems or induce paralysis in just a few minutes. King and his colleagues are now developing both engineered viruses and small-molecule mimics of the toxins in preparation for field trials.

The Blue Mountains funnel-web spider is not the only source of insect-specific neurotoxins. Thousands of spider species yet to be studied represent an untapped reservoir of diverse insecticidal compounds that could do more than control agricultural pests. As researchers inventory more kinds of venom and uncover insecticide leads, they may be able to target insects that transmit new and emerging human diseases, such as Lyme disease and Rocky Mountain spotted fever (ticks) and dengue and yellow fever (mosquitoes).

"One could envision specifically targeting mosquito larvae that carry human diseases such as West Nile or malaria, while leaving other insects and vertebrates unharmed," says King.