An international team of scientists has determined that most of the 28 million tons of carbon that enters the Arctic Ocean each year is young and unlikely to affect the global climate balance. However, Arctic warming trends could change the equation. 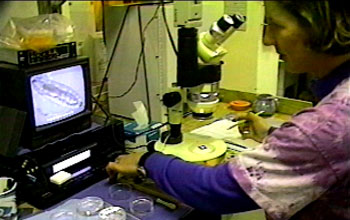 One of the scientists studying the Arctic carbon cycle as part of the NSF-funded Western Shelf ...

The Arctic Ocean receives about 10 percent of Earth's river water and with it some 25 teragrams [28 million tons] per year of dissolved organic carbon that had been held in far northern bogs and other soils.

An international team of U.S. and German scientists, including some funded by the National Science Foundation, used carbon-14 dating techniques to determine that most of that carbon is fairly young and not likely to affect the balance of global climate. They reported their findings in the March 2004 issue of Geophysical Research Letters.

Although the current carbon load does not seem likely to affect global climate significantly, they caution in their report that a well-documented Arctic warming trend could result in ancient carbon--a reservoir of the gas currently locked into peat bogs--being added to the mix and contributing to the warming trend.

"If current warming trends in the Arctic continue, we can expect to see more of the old carbon now sequestered in northern soils enter the carbon cycle as carbon dioxide. This will act as a positive feedback, tending to enhance the greenhouse effect and accelerate global warming," said Ronald Benner, an NSF-funded researcher at the University of South Carolina.

The team studied rivers in northern Russia and Alaska, along with the Arctic Ocean itself. Benner conducted some of his research as part of the Western Shelf-Basin Interactions research project, which is jointly funded by NSF and the U.S. Office of Naval Research.

Previously, scientists had not known the age of the carbon that reaches the ocean. Was it recently derived from contemporary plant material, or had it been locked in soils for hundreds or thousands of years and therefore not part of Earth's recent carbon cycle?

"Identifying the fate of carbon compounds mobilized from the vast areas of frozen wetlands in the Arctic will be a critical step in understanding the Arctic system and how it will respond to the climatic forces acting upon it," said Neil Swanberg, director of NSF's Arctic System Science Program. "How much carbon goes to the ocean, and how much to the atmosphere and in what form, are key questions we need to answer in order to see the directions the future holds for us."

The findings complement work by Laurence C. Smith, an NSF-funded researcher at the University of California, Los Angeles, indicating that massive Siberian peat bogs, widely known as the permanently frozen home of untold kilometers of moss and uncountable hordes of mosquitoes, also are huge repositories for gases that are thought to play an important role in the Earth's climate balance.