Siberian peat bogs, the frozen home of untold kilometers of moss and hordes of mosquitoes, are huge repositories for gases that are thought to play an important role in the Earth's climate balance, according to a team of U.S. and Russian scientists. 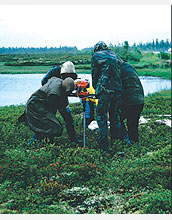 Massive Siberian peat bogs, widely known as the permanently frozen home of untold kilometers of moss and uncountable hordes of mosquitoes, also are huge repositories for gases that are thought to play an important role in the Earth's climate balance, according to a team of U.S. and Russian scientists.

The new research could help to refine those models, said UCLA associate professor Laurence Smith, whose work was funded by NSF. The findings were published in the Jan. 16, 2004, edition of the journal Science.

A key finding of the research, unrelated to modern climate change, is that the bogs themselves came into being suddenly about 11,500 to 9,000 years ago -- much earlier than previously thought -- and expanded rapidly to fill the niche they now occupy. Their appearance coincides with an abrupt and well-documented spike in the amount of atmospheric methane recorded in ancient climate records. The finding counters previously held views that the bogs were largely unchanged -- and unchanging -- over millennia. The rapid appearance of the bogs provides strong evidence that this is not the case.

Scientists have hotly debated the origin of the methane spike, variously attributing it to sources in tropical wetlands and offshore sediments. The new research conclusively points for the first time to Siberia as a likely methane source.

But the researchers also point out that the bogs -- which collectively cover an area of roughly 603,000 square kilometers (233,000 square miles) -- have long absorbed and held vast amounts of carbon dioxide, while releasing large amounts of methane in the atmosphere.

If, as many scientists predict, a regional Arctic warming trend thaws the bogs and causes the trapped gases to be released into the atmosphere, that could result in a major and unexpected shift in climate trends, according to the researchers. Smith said thawing of the permafrost would essentially turn the carbon and methane balance in the peat bogs from a scientific constant in climate-change equations to a variable.

"Traditionally, we had thought these areas were simply a gradually varying source of methane and an important sink for atmospheric carbon," he said. "They've been viewed as a stable thing that we always count on. The bottom line is Siberian peat lands may be a bigger player in climate change than we knew before."

The teams spent three seasons in the Siberian Arctic, drilling several meters down into the sphagnum moss to produce the peat samples for analysis.

"There are natural sources of greenhouse gases out there that are potentially enormous that we need to know about," Smith said. "One of the concerns is that up until now, the bogs have been more or less a sink for CO2, absorbing carbon dioxide from the atmosphere. In an extreme scenario, not only would they stop taking up CO2, they would release a lot of the carbon they have taken up for centuries."

Smith said that the team searched their Siberian peat samples for evidence that such a drastic release of gas occurred in the past, with inconclusive results.

But, he added, as other research into Earth's ancient climate begins to yield evidence that changes have occurred before, accounting for unknowns such as the carbon and methane balance in the bogs becomes more important.

"It emphasizes a point that has been emerging over the past few years; the idea that the climate system is highly unpredictable and full of thresholds that can trigger greenhouse gas sources and sinks to abruptly switch on and off," he said. "The more of them we can identify, the more accurately we can model and anticipate changes in the future."