A New Camera for Extrasolar Planets

It hasn't found planets yet—but in its first year of operation, the instrument has already proved its worth 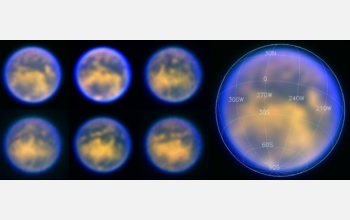 Six views of Titan, taken by the SDI camera at the European Southern Observatory.

For the better part of a year, an international team of astronomers has been working with a powerful new camera that may soon yield the first  images of planets in other solar systems—and already, it has made some significant discoveries.

The Simultaneous Differential Imager (SDI) was jointly built by the University of Arizona’s Laird M. Close, who is working under a five-year CAREER grant from the National Science Foundation, and by Rainer Lenzen of the Max Planck Institute of Astronomy in Heidelberg, Germany. Its first target was Saturn’s moon Titan: during the instrument’s commissioning run early last year at the European Southern Observatory’s Very Large Telescope in Chile, the astronomers obtained maps of Titan’s smog-shrouded surface that were almost as detailed as those made a few months later by the Cassini spacecraft. Shortly after, the researchers discovered a very rare, low-mass “brown dwarf binary” pair called Epsilon Indi Ba and Bb. Brown dwarfs are blobs of gas too small to shine like a star, but too big and warm to be called planets. Epsilon Indi Ba and Bb are only the third brown-dwarf pair known.

And then, as the astronomers described in the Jan. 20, 2005, issue of the journal Nature, SDI images of the very young star AB Doradus A revealed a brown dwarf companion having 93 times the mass of Jupiter, the largest planet in our own solar system—which makes this particular brown dwarf almost twice as heavy as theory predicted it should be based on its observed brightness.

“This discovery will force astronomers to rethink what the masses of the smallest objects produced in nature really are,” says Close.

In the meantime, he adds, the SDI team is continuing the search for actual planets, which are expected to be far dimmer than the brown dwarfs. That dimness is one big reason why no extrasolar planet has ever been imaged directly: they are lost in the glare of their parent stars. (The 120-plus extrasolar planets that have been found to date have all been detected indirectly, mostly through their effects on the motion of their parent stars.)

To eliminate this glare, the SDI first relies on its host telescope’s standard “adaptive optics” system to remove the blurring effects of Earth's atmosphere. Then the SDI takes the sharply focused light from a particular target star, and beams it into an internal optical system that is sensitive to light emitted by methane: a carbon compound thought to be abundant in the atmospheres of gas-giant planets. After some further computer processing, the result is a synthetic image in which the light from the star has been subtracted out, leaving nothing but the images of any faint, cool, methane-rich companions.

The SDI team has looked at about 20 stars so far, says Close, and the data are currently being analyzed—mainly by University of Arizona graduate student Beth Biller. “No confirmed planets yet,” he says, “but we should be able to detect planets some 20,000 times fainter than their primary star.”