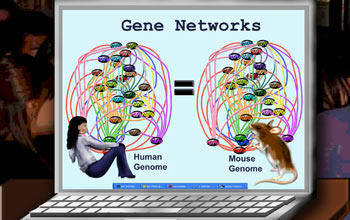 Complete understanding of how an organism operates requires more than just knowing the DNA sequence of its genome, it necessitates insight into how an organism’s genetic network functions in sync. An arduous task to say the least, but it's what drives the research of Princeton University’s Saeed Tavazoie.

Tavazoie makes predictions about gene function not just gene by gene, but throughout an organism's entire genome. As an added bonus, he has developed a program that can perform the analysis in a few minutes on a laptop computer, avoiding the need for costly computer clusters often associated with genome-wide studies.

Today’s improved techniques have made genome sequencing routine. With new reports coming out all the time, scientists can now use Tavazoie’s procedure, which identifies the genetic on/off switches in a genome, to quickly compare two genomes and glean information about how related two species are. Already,  Tavazoie has discovered that organisms as diverse as flies and mammals share many similarities in genetic control.

“Our network-level conservation approach can easily be applied to any pair of genomes.  In fact, we are finding very strong conservation of regulatory elements across all multicellular species – meaning, many of the same control mechanisms are used by seemingly unrelated organisms,” says Tavazoie.

Tavazoie’s research is part of NSF’s prestigious Faculty Early Career Development (CAREER) program.  This program supports the early career-development of those researcher-educators who are deemed most likely to become the academic leaders of the 21st century.