The Tiniest Test Kits: A Medical Future for Carbon Nanotubes?

Imagine if diabetics could read blood-glucose levels by reading a watch. Or if researchers could monitor hormone levels, in real-time, in their subjects. What sounds like science fiction today could be reality soon, thanks to carbon nanotubes. 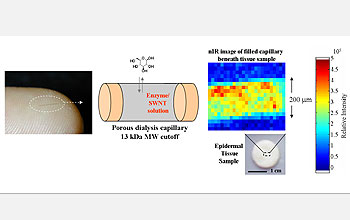 Just after Christmas 1959, physicist Richard Feynman delivered a now-famous talk--titled "There's Plenty of Room at the Bottom"--to a bemused audience at the California Institute of Technology. Could it be possible, he proposed, for scientists to assemble new materials at the level of single atoms and molecules, where there are "new kinds of forces and new kinds of possibilities, new kinds of effects"?

Tooling with the tiny, Feynman believed, could mean something very big for science. Recent research developments make clear how right he was.

Nanotechnology--from the Greek word nanos, meaning "dwarf"--is now a bustling enterprise that spans the sciences, from physics to robotics to medicine. In 2005, the federal government will spend nearly $1 billion on nanotech research, according to the 2005 National Nanotechnology Initiative strategic plan.

Michael Strano, a professor of chemical and biological engineering at the University of Illinois, is applying this largesse to the design of a new class of medical sensors. With support from the National Science Foundation (NSF)'s Directorate for Engineering, Strano and his colleagues have created tiny, implantable devices that could one day allow diabetics to continuously monitor glucose levels without drawing a drop of blood.

The sensors are made of single-walled carbon nanotubes--tiny cylinders made from single sheets of carbon. Someday, Strano says, a host of similar sensors might be used to detect a range of molecules that doctors and researchers want to track in the body--things like hormones, cholesterol and drugs.

Famously robust, nanotubes don't degrade under high temperatures. For this reason, they have long attracted the attention of researchers and engineers for the design of super-strong fibers and other materials. Nanotube-based materials also have special electronic properties, acting as conductors, semiconductors and even superconductors--losing all electrical resistance at a certain temperature--depending on how they are made.

More important for Strano's work, carbon nanotubes naturally fluoresce, glowing with one wavelength of light when illuminated by another, in the near infrared region (light of wavelengths slightly shorter than those of the infrared light produced by the human body). Near infrared light can pass through human tissue but is invisible to the human eye. In other words, from inside the body, a glowing carbon nanotube would not be visible to people but its brightness could be measured with devices that "see" light in the near infrared range.

"The goal is to develop a class of sensors that can operate within the human body and carry an optical signal outside it--it's that signal that can tell you information about local biochemical concentrations," Strano says.

Carbon nanotubes make ideal building blocks for the design of such sensors because very few molecules absorb and emit light in that range, he adds. And unlike other candidate molecules, nanotubes don't lose their ability to fluoresce over time.

To make a glucose sensor, Strano and his colleagues coated a series of nanotubes with an enzyme that breaks down glucose. Then, by adding a sheath of electron-hungry ferricyanide, the researchers quenched the nanotubes' natural fluorescence. When the enzyme reacts with glucose, it releases hydrogen peroxide as a byproduct. In turn, the hydrogen peroxide reacts with the ferricyanide, preventing the quenching mechanism.

It's an elaborate chain of events, but the effect is simple: The more glucose present, the more the nanotubes glow.

The sensor itself is a tiny, needle-like tube full of the modified nanotubes, designed to be implanted just under the skin. To read the glucose level, a watch equipped with a "laser pointer" illuminates a patch of skin over the sensor while an infrared light detector monitors the response at the same time.

When the researchers tested the sensor in a piece of human tissue infused with glucose, "it worked beautifully," Strano says.

For diabetics, a working sensor of this kind would be a welcome development. Some 18.2 million people in the United States are diabetic, according to the American Diabetes Association. Because their bodies either do not produce enough insulin or use it properly, diabetics must monitor their blood glucose levels. Strict control over blood glucose has been shown to decrease the risk of complications from diabetes including blindness and kidney disease.

Commercial devices already allow diabetics to monitor glucose levels without visiting a clinic, Strano says. But for diabetics who must draw drops of blood--usually from a finger--to test blood glucose levels several times daily, existing methods can be painful and time-consuming. But since complications from diabetes can occur when glucose levels spike suddenly, nanotube-based sensors could provide an advantage because they would monitor chemicals continuously.

"Rapid changes over an order of minutes can wreak havoc on the body," Strano says. "Pricking your finger can't quite get at that."

"The ultimate goal," says Strano, "is to make sensors that can operate from within the body, never relying on piercing the skin with wires. Then you can start thinking about things like an artificial pancreas that could inject insulin depending on what's happening, in real time."

Strano has applied for a patent, but nanotube-based biosensors won't be hitting pharmacy shelves any time soon. The sensors are still in the development process, Strano stresses, and a workable prototype would have to undergo rigorous testing before receiving FDA approval.