For one North Carolina engineering professor, making science accessible to all means starting young. Together with a team of university engineering students, Laura Bottomley brought hands-on science to every elementary classroom in a local district. 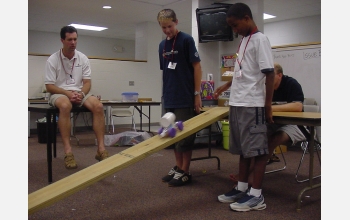 Laura Bottomley is handing out oranges in a fifth-grade classroom at Combs Elementary School in Wake County, North Carolina. Each fruit has been precut so that, when squeezed, the peels slip around and dribble juice. The lesson is not on nutrition, but plate tectonics, and the students are…well…eating it up.

The approach may be a little unusual, but then Bottomley is not an ordinary elementary school teacher. She's an engineering professor at North Carolina State University. For the past seven years, she and her colleague Elizabeth Parry have teamed engineering graduate students with Wake County teachers to make science more palatable to kids, hoping to persuade some to choose careers in science and engineering.

When Bottomley learned one of the schools was short one science teacher, she volunteered. Her own interest in engineering sprang from childhood ambitions of being an astronaut. Now she takes the helm for an hour every morning, bringing what she calls an "inquiry-based" approach to the material.

The idea, she explains, is to teach science as science is done: as an ongoing, hands-on experiment rather than as a set of facts to be learned from books. To explain how the Earth's tectonic plates shift and collide, for example, Bottomley told the students to play around with their oranges, inspect them and ask questions. She explained how orange juice is like lava, and how the upward bunching of peels is like the formation of mountain ridges.

"If you really want kids to learn science," Bottomley says, "you teach them not with facts and figures, but by doing….What matters is that they remember the process."

Traditional textbook methods aren't appropriate for all learning styles, Bottomley argues, whereas an inquiry-based approach offers something for every sense--something to look at, probe, listen to, even smell. The kids love it, she says. And teachers, though often cautious at first, quickly see how a change in teaching style can help their students meet new curriculum standards.

Some teachers, especially those who don't have a science background, may not be comfortable teaching technical subjects. Bottomley believes the resulting shortage of fun, hands-on science lessons explains, in part, why many groups--most notably women--are under-represented in the research community.

In 1999, she received a grant from the National Science Foundation's Graduate Teaching Fellows program to bring North Carolina State University engineering students into local schools. The Graduate Teaching Fellows program has twin goals: to offer graduate students teaching and outreach experiences, and to enhance science instruction in participating schools. The partnerships are a powerful force for innovation, Bottomley says.

She began by working with teenagers, but quickly saw that high school students had already elected to pursue careers in science or not. Even middle school students, she learned, have already decided whether they are interested in science. So she decided that her time was most needed in elementary schools.

But the youngest learners, too, have some opinions about science.

To size up her new audience, Bottomley collected a series of photographs of famous scientists, representing both sexes and a range of ages and ethnicities. She showed the pictures to groups of elementary students, asking them to spot the scientists.

"We were certain, absolutely certain, they would pick all the white males, but the overwhelming correlation was that the scientists were the people who were not smiling," Bottomley recalls. "It was hilarious."

In the next four years, Bottomley and 23 engineering graduate fellows went to every elementary school in the county, first meeting with teachers to design new types of science lessons and then helping to deliver them.

One of the graduate fellows, who was fluent in American Sign Language (ASL), worked directly with the hearing-impaired students at Combs Elementary in Raleigh. As she spoke with the students and their ASL-fluent teacher, she came to realize many basic scientific concepts cannot be communicated with ASL. The same sign, for example, is used for chemistry and physics. And there are no signs at all to describe the basic parts of an atom.

Bottomley and the graduate fellow kept a running list of ASL words that could be useful in the classroom. Where no words existed, they invented new ones.

For an electron, they would form the letter "E" and rotate the same hand in a circle to represent how electrons orbit the shell of an atom. "If you're going to make up signs, you might as well make ones up that represent what we're talking about," Bottomley explains. With help from the ASL-fluent teacher, the graduate fellow produced a handbook to help explain science to hearing-impaired students.

By the project's end in 2003, Bottomley's group had worked with more than 2,000 children and 75 teachers. The teachers learned how to mix science into math, social studies and physical education lessons, and how to appeal to children with different learning styles. The strategy worked: By the end of the program, the students expressed more interest at school, and parents reported that their children were talking about science and math more at home.

"All of our graduate fellows have told us that involvement in this program has been of great interest to potential employers when they graduate," Bottomley reports, adding that the teaching experience convinced several of the fellows to become professors themselves.

Another indication of the program's impact came during the local science fair. In a first for the school, two hearing-impaired students entered, and one of them won. "I don’t remember exactly what his project involved," mused Bottomley. "But I remember the look on his face when they called his name."

Bottomley received another NSF grant in 2004 to develop inquiry-based math lessons. And this time, she has an eager cohort of fifth graders to help try out new ideas. "Here I am, writing all these proposals associated with inquiry-based learning," she says, "and now I get to try them out every morning. I love it."