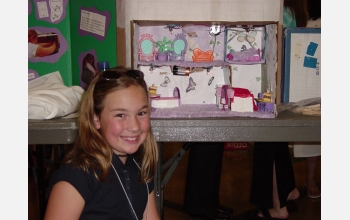 The smiling face of a young scientist.

Men outnumber women in science and engineering today, and, judging from the numbers of students obtaining advanced degrees, the imbalance shows little sign of reversal. According to statistics published by the National Science Foundation (NSF), American universities awarded 5,265 engineering PhDs in 2003, a whopping 83 percent of which were awarded to men. The disparity is less dramatic in the sciences--57 percent of science doctorates earned in U.S. universities in 2003 went to men--but women remain outnumbered in many scientific fields.

How can schools encourage more girls to study science and, perhaps, consider careers in math, science and engineering?

Researchers at the University of North Texas (UNT) in Denton have an idea, one that involves elementary and high school girls. The key, it seems, is to put the two groups together.

In 2002, with support from the NSF Division of Human Resource Development, UNT education professor Tandra Tyler-Wood launched a science-themed, after-school program for girls in the local school district. Years of curriculum design experience told her that a hands-on, active approach kindles students' natural curiosity. Adding an element of teamwork, she guessed, would be a fun way to boost self-confidence and creativity.

In the program's first year, Tyler-Wood matched 30 fourth- and fifth-grade girls with teenage mentors recruited from the Texas Academy for Mathematics and Science (TAMS), a residential program that gives talented high school girls an opportunity to simultaneously earn their high school diplomas and finish two years of college at UNT. Each TAMS student received a small stipend for participating in the program.

Meeting throughout the year on Tuesday afternoons, the student pairs explored the scientific method through a series of hands-on experiments in an outdoor laboratory. The goal, Tyler-Wood says, was to improve the younger girls' critical thinking skills but also to hold their interest. She knew it was an ambitious task.

Together, the students explored the properties of soil, the oceans and the sun. They identified the physical properties of matter, learned how organisms survive and adapt, and studied magnetism and conductivity. To learn about ecology and animal life cycles, they raised colonies of meal worms and formed hypotheses about their behavior.

Tyler-Wood dubbed the project BUGS, or Bringing Up Girls in Science. The girls became fast friends, and the TAMS students' natural enthusiasm for science proved contagious.

"When I was in elementary school, all we ever did after school was arts and crafts and sports. I'd never heard of girls getting together to learn about science," said Tracy, a high school student who became a TAMS mentor. "I decided to get [my BUGS mentee] started off asking questions, so maybe she'll go on asking questions and learning why some things work."

At the end of the year, the mentoring teams presented the results of their work to parents, teachers and friends. The program concluded with a two-week "capstone" experience at a local environmental education center, giving the girls a chance to conduct experiments in the field and take part in environmental awareness programs.

In the following two years, the high school students were introduced to mentors of their own--science and engineering majors from the American Association of University Women. The college women offered advice on everything from career choices to college life.

Curious to see whether the partnerships had, in fact, encouraged an interest in science among the younger students, Tyler-Wood's research team conducted interviews with each participant before, during and after her participation in the project. Using standardized science assessment tests, the researchers followed the students' math and science skill levels.

The researchers also tested a group of fourth- and fifth-grade girls who weren't involved in the BUGS program. Compared to this "contrast group," BUGS students showed a marked increase in enthusiasm, confidence and science skills at the end of the school year.

Everyone involved in the project expected the younger girls to look up to their teenage mentors, says Tyler-Wood, and it was clear that they did. "The younger girls look at the success their mentors have achieved and say, 'Hey, she's not too different from me. If this high school student can succeed, so can I'," she says.

"The opportunity to interact with slightly older students who are highly successful in science, technology and mathematics has proven to be a key component in the overall success of the program," says Tyler-Wood.

Surprisingly, the older girls appeared to benefit from the relationships just as much. "If the younger girls knew the older girls had a big physics test coming up, they would call and give supportive messages," Tyler-Wood reports. "They'd say, 'You can do this, because you're my mentor and you're the smartest person in the world."

The partnerships worked, Tyler-Wood says, because the TAMS mentors felt a responsibility for their younger mentees. If the TAMS students were having trouble in an advanced science or math course, she says, "they would think twice before dropping it. They wanted to show the younger girls that success is possible through hard work."

Tyler-Wood hopes to continue the BUGS project beyond its three-year demonstration phase. And she would like to bring the concept to girls in middle school, noting that many girls enter high school without adequate math and science preparation.

She also hopes to export what she has learned from the project to the broader education community: "There is clearly international interest in attracting girls to science studies. We have described the project to overflowing crowds of educators in the Ukraine, Switzerland and Spain, and hope to do additional outreach," she says.

Related Programs
Research on Gender in Science and Engineering