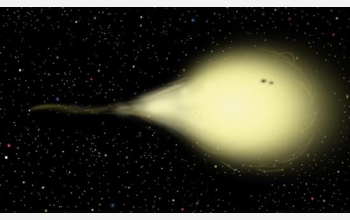 EF Eridanus as it might have looked some 500 million years ago when the mass transfer began.

Astronomers using the Gemini North and Keck II telescopes on the summit of Mauna Kea, Hawaii, have come upon a cosmic crime scene: a case of stellar domestic violence in which one member of a binary pair of stars drew so much mass from its companion that the companion died, and in the process, regressed to a strange, inert body resembling no known star type.

"Like the aggrieved partner in a romantic relationship, the donor star gave, and gave and gave some more until it had nothing left," says astronomer Steve B. Howell, one of the system's co-discoverers. Howell is with the Wisconsin-Indiana-Yale-NOAO (WIYN) telescope and the National Optical Astronomy Observatory in Tucson, Ariz.

The pair of stars orbit one another some 300 light-years from Earth in the direction of the constellation Eridanus, and are together known as EF Eridanus. One of the pair is a white dwarf, the burned out core of a massive star that exhausted its nuclear fuel long ago. Like all white dwarfs it is incredibly dense, with perhaps 60 percent of  the mass of the Sun, say, compressed into a sphere no bigger than the Earth. Its companion, by contrast, was once as a perfectly normal star that shone in a perfectly normal way, much as our own Sun does today.

Unfortunately for the normal star, that was not to last. Perhaps half-a-billion years ago, the companions drew too close to one another and the white dwarf's gravity began to pull tendrils of hot gas from normal star's outer layers.  That first transfer of mass across the gap caused the orbit to shrink, bringing the normal star ever deeper into its companion's gravitational field. Eventually, the stars spiraled closer and closer, while the mass transfer steadily increased from a wisp to a hemorrhage.

Today, the donor star has long since been bled dry. No longer "normal" in any sense, it has lost so much mass it has ceased to generate nuclear energy in its core, which means astronomers must pronounce the former star dead. It is now no more than fading lump of--something.

"The donor star has reached a dead end," says Howell. "It is far too massive to be considered a super-planet, its composition does not match known brown dwarfs, and it is far too low in mass to be a star. There's no true category for an object in such limbo."