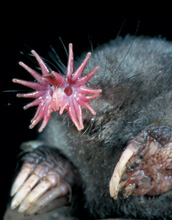 
The star-nosed mole uses the 22 appendages encircling its nose to find and identify food.

It's a face only a mother could love, but recently the star-nosed mole used the 22 fleshy appendages encircling its nose to set records and make headlines. This marsh-dwelling mole has been a celebrity ever since Ken Catania and Fiona Remple of Vanderbilt University reported that the odd protuberances allow the mole to identify and eat food at speeds that defy the eye.

The less time and energy the nearly blind mole expends finding food, the better its chances for survival; thus, the advantage of having a highly specialized system to compensate for its poor eyesight. Until 1995, theories abounded concerning the function of the star-shaped structures. Some suggested they were a keen olfactory organ, while others proposed antennae that detected electrical fields. Then Catania and his coworkers performed studies that made it clear the appendages functioned as a supersensitive touch organ.

Catania continued this work by creating a plexiglass tunnel in which the mole could be observed as it foraged for food. It turned out the mole was so adept at finding prey items, Catania needed a high-speed video camera to show the bizarre animal took only one-quarter of a second to find and gulp down a morsel.

That's a new speed record for finding and eating food in the animal world. In fact, it's so fast, the mole's brain may have reached its limit for processing information coming in from the 22 sensors. When the researchers carefully reviewed the video in slow motion, they realized the mole initially missed some food bits and quickly reversed course to eat them on a second pass. But even with these so-called "double-takes," the mole is still ahead of the game, because it can so quickly find and eat little pieces of food that would ordinarily not be worth the energy to identify.

Importantly, the star-nosed mole has become an exceptional model system for examining brain maps, or the relationship between specific behaviors and mapped sites of  local brain activity. Additional studies by Catania strongly suggest behavior is actively shaping the brain map in the star-nosed mole. Catania's research could be key to gaining insight into brain plasticity and how behavior in the environment impacts brain structures.

Catania's research is supported through the National Science Foundation's (NSF) Division of Integrative Organismal Biology and NSF’s prestigious Faculty Early Career Development (CAREER). CAREER supports the early career development of those researcher-educators who are deemed most likely to become the academic leaders of the 21st century. Catania also received the 2005 American Association of Anatomists' C.J. Herrick Award, an annual award given to recognize promising young investigators in the field of comparative neuroanatomy.

The star-nosed mole study was published in the Feb. 3, 2005, issue of the journal Nature.