Antarctic researchers in separate sites, thousands of miles apart, find what they believe are the fossilized remains of two species of dinosaurs previously unknown to science. 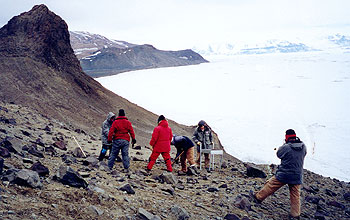 A research team at work on James Ross Island, near the Antarctica Peninsula.

In December 2003, against incredible odds, researchers working in separate sites, thousands of miles apart in Antarctica found what they believe are the fossilized remains of two species of dinosaurs previously unknown to science.

One of the two finds, which were made less than a week apart, is an early carnivore that would have lived many millions of years after the other, a plant-eating beast, roamed the Earth. One was found at the sea bottom, the other on a mountaintop.

Working on James Ross Island off the coast of the Antarctic Peninsula, veteran dinosaur hunters Judd Case, James Martin and their research team believe they have found the fossilized bones of an entirely new species of carnivorous dinosaur related to the enormous meat-eating tyrannosaurs and the equally voracious, but smaller and swifter, velociraptors that terrified movie-goers in the film "Jurassic Park."

Features of the animal's bones and teeth led the researchers to surmise the animal may represent a population of carnivores that survived in the Antarctic long after they had been succeeded by other predators elsewhere on the globe.

Case, the dean of science and a professor of biology at Saint Mary's College of California who discovered the bones said the shape of the teeth and features of the feet are characteristic of a group of dinosaurs known as theropods, which includes the tyrannosaurs, as well as all other meat-eating dinosaurs. The theropods, or "beast-footed" dinosaurs, make up a large and diverse group of now-extinct animals with the common characteristic of walking on two legs like birds. Recent research has shown that birds are direct descendents of theropods.

The remains include fragments of an upper jaw with teeth, isolated individual teeth and most of the bones from the animal's lower legs and feet. The creature likely inhabited the area millions of years ago when the climate and terrain were similar to conditions in today's Pacific Northwest and radically different than they are today.

Martin, curator of vertebrate paleontology at the South Dakota School of Mines & Technology, said the size and shape of the ends of the lower-leg and foot bones indicate that in life the animal was a running dinosaur roughly 1.8 to 2.4 meters (6 to 8 feet) tall.

The team believes that the body of the dinosaur may have been scavenged by marine lizards after it died, coming to rest on the ocean bottom, where it was found among the remains of creatures similar to those that feasted on its body.

At the same time, thousands of miles away, a research team led by William Hammer of Augustana College in Rock Island, Ill., was working in the Antarctic interior on a mountaintop roughly 3,900 meters (13,000 feet) high and near the Beardmore Glacier. They found embedded in solid rock what they believe to be the pelvis of a primitive sauropod, a four-legged, plant-eating dinosaur similar to better-known creatures such as brachiosaurus and diplodocus. Now known as Mt. Kirkpatrick, the area was once a soft riverbed before millions of years of tectonic activity elevated it skyward.

Also a veteran dino hunter known for his discovery of Cryolophosaurus ellioti in 1991, Hammer had returned to the site of that find to continue his work, which had been halted in part because the Cryolophosaurus excavation had dug far into a cliff face, creating a potentially dangerous overhang. Specialized workers were flown into the research camp at Beardmore Glacier to remove the overhang and make it safer to continue the excavations.

Based on field analysis of the bones, Hammer and his fellow researchers believe the pelvis -- roughly one meter (three feet) across -- is from a primitive sauropod that represents one of the earliest forms of the emerging dinosaur lineage that eventually produced animals more than 30 meters (100 feet) long.

Basing his estimates on the bones excavated at the site, Hammer suggests the new, and as-yet-unnamed creature was between 1.8 and 2.1 meters (six and seven feet) tall and up to nine meters (30 feet) long.