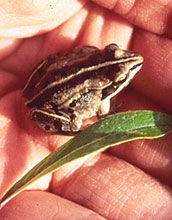 The North American wood frog survives the winter with a heart-stopping strategy.  This frog, found from southern Ohio up to the Arctic Circle, puzzles researchers with its ability to literally "freeze and thaw" along with normal winter-spring weather patterns.

To survive winter's freezing temperatures, the frog doesn't fight the temperatures; it just freezes from the outside-in.

Jon Costanzo, a professor at Miami University in Ohio, studies amphibians that live in harsh climates, especially cold ones.  His research was featured on NOVA's "scienceNOW," a television magazine series on PBS.  The "Frozen Frogs" episode shows Costanzo holding a frozen frog in the laboratory, as well as identifying the frigid amphibians in their natural environment.

At the first sign of ice in late fall or early winter, the frog freezes solid as a rock.

"That touch of ice immediately sets off signals inside the frog that pulls water away from the center of its body, so the frog's internal organs are now wrapped in a puddle of water that then turns to solid ice," says Costanzo in "Frozen Frogs."

The frog's heart stops beating, its kidneys stop functioning and its respiration ceases--for months.  The frogs endure this suspended animation by producing a type of antifreeze made with glucose, keeping the water in their cells in a liquid state at temperatures below 32 degrees Fahrenheit (0 degrees Celsius).

When warmer spring temperatures trigger the frog to thaw, its heart and brain thaw first, followed by its body, all in perfect synchrony.  Costanzo refers to this series of events as "a spontaneous resumption of function."  Within 10 hours, the frog is fully functional.

Costanzo and others are studying this amazing phenomenon in hopes of discovering new technology to preserve human organs that are destined for transplantation.

"Currently it's not possible to freeze human organs for transplantation," said Costanzo, "yet the wood frog and several other amphibians and reptiles have solved not only the problem of freezing individual tissues and organs, but also that of simultaneously freezing all organ systems."

According to the Scientific Registry of Transplant Recipients, more than 85,000 patients were on the national waiting list for an organ transplant as of June 2004.  At present, a heart can be persevered for only five hours before it must be implanted into a recipient; a kidney might last 72 hours.  If organs could be preserved longer, more time would be available for both the recipient and the associated surgical team, leading to improved transplantation success rates.

Costanzo's research on freeze tolerance and metabolic depression in hibernating animals is supported in part by the National Science Foundation's (NSF) Division of Integrative Organismal Biology.

Major funding for NOVA "scienceNOW" is provided by NSF.