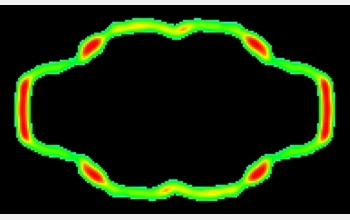 A vault particle in cross section

Naturally occurring nano-capsules, known as "vaults," could provide a whole new class of delivery vehicles for therapeutic drugs and DNA, according to recent research. Indeed, vaults could be used for a wide range of applications in nanotechnology--even though no one can figure out how nature itself uses them.

That's not for lack of trying. In the nearly two decades since vaults were discovered, researchers have found that these hollow, barrel-like structures circulate by the tens of thousands in just about every cell of the human body, as well as in the cells of monkeys, rats, frogs, electric rays and even slime molds. Vaults are presumably doing something worthwhile; otherwise, they never would have survived millions of years of evolution.

But when scientists breed mice that are genetically incapable of making the particles, the mice show no ill effects whatsoever. They just grow and thrive and eat their mouse pellets like lab mice the world over. Even their vault-free cells seem perfectly normal.

Still, this ongoing struggle with the mystery of vaults hasn't slowed researchers' efforts to explore their practical uses. To begin with, notes UCLA biochemist Leonard Rome, who runs the laboratory where vaults were discovered in 1986, he and his fellow vault researchers have gained a good understanding of the particles' structures and how they assemble themselves out of smaller protein molecules (plus a tiny bit of RNA). Thus, Rome says, by using the standard techniques of biotechnology, "we can engineer the particles to give them just the properties we want"--a prospect that could lead to vaults being used as structural elements for nanoscale machines, say, or as switches for nanoscale electrical circuits.

Better yet, Rome and his UCLA colleagues have recently shown that vaults can function as nanoscale Trojan Horses, carrying foreign molecules past cellular membranes that are expressly designed to keep such interlopers out. Their experiments were funded by the National Science Foundation (NSF) under a nanoscale interdisciplinary research team grant, and were published in the March 7, 2005, online edition of the Proceedings of the National Academy of Sciences.

As a critical first step, the researchers identified a molecular "zip code" that will reliably steer foreign molecules into the vault cavity. The zip code is actually a sequence of about 100 amino acids they isolated from one of the vault's protein building blocks. Its natural function is to chemically bind that protein to the capsule's inside wall. So once the researchers had attached the sequence to the molecule of interest--they used two different fluorescent molecules for the experiments--they just mixed that result with native vault proteins in the process of assembling themselves, then found the molecule snuggly encased in the vault interior.

"As a proof of concept this is very, very exciting," says Eve Barak, the UCLA group's program officer at NSF. But of course, she adds, there is also a second critical step, which is to demonstrate that vaults can actually cross the cell membrane and get inside. "That's not been shown before," she says.

In practice, that step turned out to be almost easy, says Rome. "You just feed them to the cells," he says, describing how a liquid full of suspended vault particles was poured across a tissue sample in a laboratory dish, "and the cells take them up."

And then, the final critical step: proving the vaults and their cargo molecules could survive and function inside the cell. There, too, the news was good, says Rome. When vaults carrying the fluorescent "green-lantern" protein were added to the mix, the objects entered the cells and glowed green from the inside. And in a separate experiment, when vaults carrying the firefly enzyme, luciferase, were placed in a test tube and doused with the compounds luciferase needs to fire up and glow--it did. Although the response was slow, Rome says the vaults did get through--at the molecular level the walls are actually an open latticework that looks like nanoscale chicken wire. And this fact strongly suggests that in practical applications, vault-encapsulated drugs, DNA strands and other such molecules will be able to interact successfully with cell contents.

In future experiments, says Rome, he and his team hope to bioengineer vaults that will hone in on specific cell surface receptors, so that they can be directed to enter only certain types of cells. "And then we'll be able to go after some of the applications on our list," he says. That list is a long one, with possibilities in both the medical and non-medical arenas. For example: