The discovery of capuchin monkeys in the wild using stones as nutcrackers may tell us something about the monkeys' ingenuity, and more about ourselves. 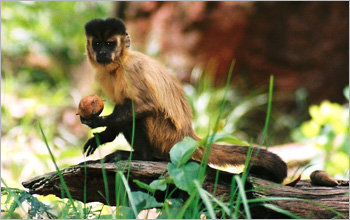 An adult female capuchin monkey holds a palm nut that she has collected from the ground.

Imagine seeing a group of wild monkeys in a remote forest of Brazil using rocks and stones to forage for food. Apparently capuchins—monkeys more familiar as organ grinders and in circus sideshows—are ingenious enough on their own to use crude stones for cracking palm nuts. The discovery, reported in the December 2004 American Journal of Primatology, is remarkable in that such routine tool use in the wild was previously only ascribed to chimpanzees.

The study, which was led by University of Georgia psychologist Dorothy Fragaszy, is the first to document tool-use behavior in an entire population of wild capuchins. The study was co-authored with Patricia Izar and Eduardo Ottoni of the University of Sao Paulo, Brazil, Marino Gomes de Oliveira of the Fundação BioBrasil, an environmental organization in Bahia, Brazil, and Elizabetta Visalberghi of the Consiglio Nazionale delle Ricerche, the Italian National Research Council in Rome.

"This type of tool use is a very sophisticated behavior," said Fragaszy, an expert in capuchins who first learned of the sighting after a colleague sent her a BBC Wildlife magazine photo essay. "It has never been witnessed in a group of wild monkeys before," she said. "There have been some isolated incidents, but no routine tool use in a wild population."

In captivity, tool use is quite common among capuchins.  But to determine whether the behavior exists in the wild, Fragaszy traveled to Brazil where the BBC photos had been taken. Her National Science Foundation (NSF)-funded exploratory visit took place in early September 2003 at a biological reserve controlled by Fundação BioBrasil in a dry woodland area in northeastern Brazil, an ecotourism site noted for its populations of rare macaws.

"We confirmed that the monkeys were wild. We surveyed the area for lithic (stone) artifacts showing evidence of the nut-cracking activity," said Fragaszy. From a blind built 15–20 meters from one of the nut-cracking sites frequented by the capuchins, Fragaszy and the team observed a group of wild capuchin monkeys (Cebus libidinosus). The area seemed to offer scarce food resources, especially in a dry season. It contained natural vegetation and, scattered across the site, boulders and exposed rocks that the capuchins used as anvils.

"We surveyed the area and measured the weight of the hammer stones. Our original estimate was 470 grams (16.6 ounces), but on our next trip, funded by National Geographic Society and the L.S.B. Foundation, we found that they were actually over a kilo. Adult capuchin monkeys weigh 3-4 kilos (6.6-8.8 pounds), so they are lifting a third and sometimes a half of their body weight!"

The research in Brazil revealed some interesting findings about the level of sophistication in tool use by the Brazilian capuchins. "There are a number of ways nuts can be cracked wrong," says Fragaszy. "There are several relations that need to be done in the right order. The monkey must put the palm nut on a flat rock or 'anvil' and set it so that it doesn't roll off. Then the monkey must pick up another stone, the 'hammer,' that is heavy enough to crack the nut, but not so heavy that the monkey can't lift it," she adds. "Then the monkey must aim and strike the nut with enough force to crack it."

"The monkeys need to be able to crack the nuts and get the food out of the shells. They use hammer stones to do this. And it seems that this behavior appears all year round."

"In humans, hammering is ubiquitous," says Fragaszy. "Percussive tool use, or hitting things, is even seen in early human history. Everyone hammers. I study how humans learn to use objects as tools, as well as how monkeys learn to."

There is, however, one notable difference in the research on capuchin monkeys, according to Fragaszy. "There is no evidence of teaching. The juvenile monkeys share the propensity to explore objects in a percussive fashion, as children do. They explore, but they are not effective," she said.

"The effective behavior only appears in mature capuchins. The juveniles are interested in the activity, they play lifting stones and pounding things, they try to crack one nut with another, but they are not strong enough to crack the nuts with the stones."

As for the Brazilian capuchin study, the international collaboration is central to the work, first, and most importantly, on an intellectual basis, says Fragaszy. "The team has a variety of specialists. I am a psychologist. We have ecological expertise, expertise in field primatology and more. And the landowner of the site is an important member of our team," she adds. "Our Brazilian colleagues speak fluent Portuguese and can communicate well with the local people. The local residents knew that these monkeys used stones as tools before we did, but we are the first team of scientists to document the behavior."

Fragaszy hopes to combine her research on capuchin monkeys with her research on the origins of early tool use in humans. That collaborative project investigates how tool use emerges from infants' perception-action routines; how tool use involves detecting and establishing relations between objects and surfaces; how skill with a familiar tool is acquired; and how the development of skill with hammer tools in young children differs from how capuchin monkeys, which spontaneously use objects as hammers, acquire skill in the same contexts. "Taken together, the results of the experiments will help us better understand how tool use develops in children and to what degree tool use represents an ability that is uniquely human," says Fragaszy.