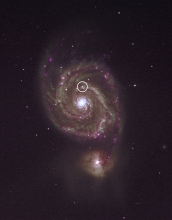 The Spiral Galaxy M51, with the supernova circled.

Thanks to a happy accident of timing--and their own careful observations--a group of 18 high-school teachers has recently made a valuable contribution to astronomy research.

Their moment came on the night of June 30, 2005, when they were at the Kitt Peak National Observatory in Arizona undertaking a five-night observing run as part of the Teacher Leaders in Research Based Science Education (TLRBSE) program.

As its name implies, the TLRBSE program is designed to help experienced teachers master the techniques of research-based science education, and to prepare them for mentoring other teachers when they return home. The program is conducted by the National Optical Astronomy Observatory (NOAO) in Tucson, Arizona, which operates Kitt Peak with funding from the National Science Foundation (NSF).

As they were learning how to take telescope images at the Wisconsin-Indiana-Yale-NOAO 0.9-meter telescope, the teachers decided to target the Whirlpool Galaxy, M51, a famously photogenic spiral galaxy that just happened to be available high in the early evening sky. (It is located 37 million light-years from Earth in the constellation Canes Venatici, near the handle of the Big Dipper.) They proceeded to take images of the galaxy in four different colors.

What they didn't know was that just two nights earlier, on June 28, a German amateur astronomer named Wolfgang Kloehr had looked at M51 and seen a brand-new supernova--a massive star that suddenly explodes with phenomenal violence. Moreover, Kloehr's discovery was being confirmed that very night, June 30, by the Katzman Automatic Imaging Telescope at Lick Observatory in California. It would soon be reported to the astronomical community by International Astronomical Union (IAU) Circular 8553 and given the designation SN 2005 CS.

But the teachers had finished taking their images before the IAU circular even arrived. "So these are some of the earliest images of the supernova taken with broadband filters," says Stephen Pompea, manager of science education at NOAO. "This should turn out to be a very valuable data set."

"The teachers could barely contain their excitement when they realized that they happened to be among the first researchers to take science-quality images of the new supernova," adds TLRBSE project manager Katy Garmany. "One of the key elements of the TLRBSE program is training the teachers to think and work like research astronomers, and then let them go do it, but this certainly exceeds all of our hopes and expectations."

The TLRBSE teachers made further images of M51 after the discovery was announced using the WIYN 0.9-meter, and also obtained spectroscopic data with the Kitt Peak 2.1-meter telescope. In the process they produced the image shown here, which is marked with the location of the new supernova.

A later IAU circular reported that the object appears to be a fresh Type II supernova, which are produced when the iron core of a single massive star collapses and rapidly implodes. Subsequent circulars announced that the progenitor star that produced the supernova has been identified, a rare situation for supernovae discovered in distant galaxies. This identification will allow astronomers to learn more about the types of stars that end their lives as supernovae.

In the last decade, NOAO has trained 132 teachers to do high-quality astronomical research under the TLRBSE program and its precursor. These teachers received additional training on helping students learn to use telescopes, interpret astronomical images and conduct research of their own. There are 10 active astronomy research programs being conducted by these teachers and their students nationwide, using data obtained at Kitt Peak and by space telescopes such as the Spitzer Space Telescope.

Related Awards
#9613615 Cooperative Agreement for the Management, Operation and the Maintenance of the National Optical Astronomy Observatories (NOAO)