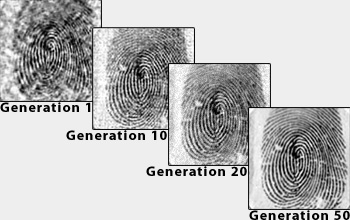 It sounds like a plot for a science fiction movie, but it's not. Computers now create programs that solve complex problems better than programs designed by people. University of Texas at Austin researchers Uli Grasemann and Risto Miikkulainen, for example, recently reported that a computer-generated algorithm can digitally improve images of fingerprints better than the FBI's human-designed program currently can.

An "algorithm" is a computer program designed to systematically solve a problem. Image compression algorithms try to minimize the number of bytes in graphics files while preserving image quality as much as possible. Fewer bytes mean less storage space and faster file transfer times. JPEG, for example, is a common compression format used for photographs.

"Genetic algorithms" are created when computers evaluate and improve a population of possible solutions to a problem in a stepwise fashion. The new program evolves by letting good solutions produce offspring as bad solutions die out. Over time, the individual solutions in the population become better and better, producing a final, best solution. The method uses terms derived from biology, such as generation, inheritance and mutation, to describe the particular program manipulation the computer uses at each step of improvement, hence the name genetic algorithm.

Grasemann and Miikkulainen applied genetic algorithms to solve the fingerprint compression puzzle in work supported by the National Science Foundation's Computer and Information Science and Engineering directorate. They provided their computer with the basic programming instructions needed to compress graphic images and then waited for a better algorithm to be born. The progress of the evolving program was tested at each generation. After 50 generations, the genetic algorithm consistently outperformed the human-derived WSQ.

Grasemann pointed out that other human-designed, modern image compression programs also surpass WSQ, but the computer-generated nature of their method is unique.

As Grasemann said, "It is fascinating and a little ironic that computers can come up with new and creative solutions that human experts miss. There is definitely tremendous potential to increase the quality of work in many areas of science and engineering using genetic algorithms."

Grasemann and Miikkulainen, as well as researchers from two other NSF-funded projects, received awards at the 7th annual Genetic and Evolutionary Computation Conference (GECCO) held in Washington, D.C., earlier this year. The competition pits man against machine in tasks ranging from how to design improved ventilation systems for commercial buildings, to improving synthetic antibacterial compounds. Results of the conference are presented in the Proceedings of GECCO 2005, published by the Association for Computing Machinery.