Earth's Biodiversity Now on Your Desktop 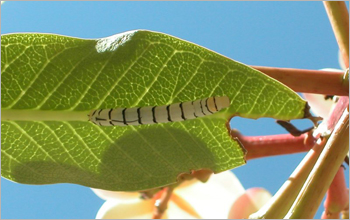 Anyone in the world with an Internet connection and an interest in the Earth's living species can now access worldwide networks of biodiversity data from his or her desktop, thanks to the Global Biodiversity Information Facility (GBIF). The world's biodiversity encompasses all living species of plants, animals and organisms on the planet Earth, as well as their genetic variants and the ecosystems in which they live.

With the emergence of the Information Age, scientists and concerned citizens worldwide have advocated for a means to share biodiversity data to encourage sustainable and responsible use of natural resources. The GBIF was established in 2001 with the mission to digitize and disseminate the world's primary biodiversity data via the Internet. The GBIF data portal provides access to information, including images, of the vast array of Earth's living species.

"We are thrilled to have 47 countries and 31 international organizations as voting participants and partners," states Meredith Lane, GBIF's public and scientific liaison. Members have committed to sharing their biodiversity data, resources and expertise to ensure the availability of those data online, and to providing continued funding to maintain the GBIF.

Information Access is Key
According to the GBIF, some three quarters of all species of plants, animals and other organisms are found in the developing world. Ironically, three quarters of the information about the Earth’s species was only accessible in developed countries. Policy makers did not always have access to primary ecological data to inform crucial decisions about responsible use of natural resources and the potential impact upon particular ecosystems. But the GBIF changes all of that--in fact, supporters say its significance to humankind can be compared to the invention of the printing press.

"The GBIF provides unprecedented access to biodiversity informatics tools, making it possible to infuse decision-making and natural resource management with raw, primary point data about species' occurrences," Lane explains. "Without these data, important decisions are often based on little more than supposition or anecdotal information."

The term "informatics" describes the application of information sciences to the manipulation, storage, retrieval and classification of data. The Biodiversity Analysis Tool (BAT), a demonstration project on the GBIF Web site, is an informatics tool that provides users with the ability to access records of species observations from GBIF providers and view a map of the distribution of a particular species in a specific area; for example, the richness of Saturniidae moth species across Costa Rica.

In human and animal health, GBIF data can be used to analyze disease vectors and predict emergent diseases. In agriculture, species occurrence data can be used to determine proximity of wild relatives of crop plants, and applied to the regulation of genetically modified crops or the discovery of sources of disease-resistant genes. GBIF data also are extremely useful for tracking the spread of invasive species and identifying likely invasion routes. Additionally, these data can be used to predict places where previously unknown populations of endangered species might be found.

"In the first years of GBIF's existence, we have proven that data held in many databases around the world--highly disparate databases running on different computer platforms, using varying software packages and data schemas--can be brought together in a single view on our data portal," Lane comments.

Organizational goals are focused on six areas: data access and database interoperability; digitization of natural history collections data; electronic cataloguing of the names of known organisms; outreach and capacity building; "species banks;" and digital biodiversity literature resources. "GBIF is working with the Taxonomic Databases Working Group (an international not-for-profit scientific and educational association) to develop standards for data and metadata that enable the functionalities we are building," Lane explains. Users of the data portal can now query across more than 91 million records in 687 databases served by 168 providers (as of April 2006). "Soon, it will be very easy to query across species, molecular, ecological and ecosystem level databases in much the same way."

Scientists, natural history museums, governments and policy makers are the primary users of the GBIF, although it is equally valuable and accessible to many others, including schoolteachers, horticulturists and nature enthusiasts. According to Lane, the GBIF also makes it possible for science and society to capitalize on investments in natural history specimens, zoos, images and other collections, as well as observations that have been made over the past three centuries.

Lane concludes, "Balancing human needs with actions for sustainability is the challenge of the 21st century. It is exciting to be part of the GBIF, building a worldwide community dedicated to sharing these data."