Getting a Message Across the Universe: Would E.T. Send a Letter? 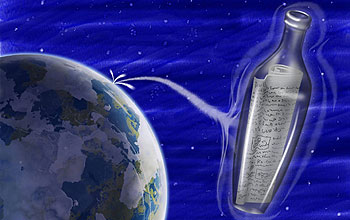 Could the proverbial message in a bottle be the ticket to interstellar communication?

The prospect of communicating with intelligent life beyond Earth has long captured human imagination. For decades, scientists have been patiently scanning the skies for radio waves or other signs that someone, somewhere, is sending missives into space.

So far, that search has been fruitless. But we might be wise to look as well as listen, says Christopher Rose, a physicist and professor of electrical engineering at New Jersey's Rutgers University. By his calculations, it's vastly more efficient to send large messages across space not in the form of radio waves or beams of light, but in physical packages. That's right: If we want to send a note to outer space, Rose says, we should consider sending a message in a bottle.

Likewise, we should anticipate messages that might arrive here as physical artifacts--embedded in a meteorite, perhaps, or falling to Earth after hurtling across the cosmos on a comet.

Rose and co-author Gregory Wright, a physicist at Antiope Associates in Fair Haven, N.J., published that surprising conclusion in the journal Nature in 2004. But they did not set out to make headlines on the best way to contact "E.T."

Rose's research began with a grant from the National Science Foundation to study how to make wireless communications on Earth more efficient. The project's goal, he explains, was to figure out how to "get the most amount of information across for the least amount of energy." While investigating that subject, it occurred to him that this work might have implications for interstellar communications as well.

In wireless communications, transmitting information with radio waves makes sense because speed is a critical consideration. But in some instances--such as when two people are just around the corner from each other--it's more efficient, from an energy conservation perspective, to simply deliver a letter than to use radio waves or some other form of electromagnetic energy.

"That was the jumping off point," says Rose. "I thought, 'Huh, there's a fundamental issue here. When is it better for me to hand over the information than to radiate it?' And that was the kernel of the idea."

Rose calculated how much energy would be required to ship a message 1,000 light years into space. A package traveling a million kilometers an hour (about 670,000 miles per hour) would need a million years to reach its destination. A radio transmission would get there in only a fraction of that time--an obvious advantage when the sender can't tolerate a delay, as in the case of cell phone conversations on Earth.

But when timing is irrelevant, Rose found that sending a physical message makes more sense.

The advantage exists because of the nature of electromagnetic waves. Although electromagnetic radiation can travel very fast (about 6.7 million miles per hour), it disperses and weakens across space. That's why a flashlight beam only shines brightly enough to see over short distances, and why a parent has to shout more loudly at her child, the further away the child is.

In other words, the farther a light beam travels, the more it spreads out. Any message encoded by it will have likewise faded in the voyage. The same is true for radio waves: For a radio message to retain its meaning over a long distance, it must be beamed out with high energy. A message inscribed on an object, on the other hand, remains as legible when it reaches its destination as on the day it was sent, no matter how far it has gone.

What's more, once a physical message arrives at a given destination, it stays there. A radio signal must be intercepted at the moment it passes by in order to be "received."

While it would take a serious amount of protection--thousands of pounds of lead, in Rose's estimation--to prevent damage by cosmic waves in transit, the energy required to package information and hurtle it across space would be far less than that required to beam out high-powered electromagnetic signals on a regular basis. The further a message must go, and the longer the message is, the greater the advantage of sending that message in a physical form.

The advantage is strong enough, Rose says, to compensate for the fact that thousands, or even hundreds of thousands, of messages might need to be sent to cover the range of potential star systems that could potentially pick up a single radio signal.

If, for instance, we wanted to send a very large message--say, all of the information inside the Library of Congress--to a star 10,000 light years away, it would be a hundred billion times more efficient to encode it in silicon chips than it would be to radiate the same amount of information from the world's largest radio telescope.

The idea of sending physical objects into space is nothing new. When NASA's Pioneer 10 spacecrafts went plunging into space in 1977, they carried twin 12-inch disks bearing words, music and images selected by a team of scientists to represent life on Earth. Now at the edge of the solar system, the Pioneer 10 crafts may represent the best approach, says Rose.

Like much good news, however, this discovery comes with a catch: A physical package could not travel as fast as radio or light waves. At a reasonable speed, Rose estimates a package could take 20 million years to reach distant stars. That's but a blip in time, given the galaxy's 10 billion-year history, but it doesn't inspire hope for the kind of "contact" made famous by Jodie Foster in the movie of the same name.

For simple messages meant to convey only "I am here," Rose says radio waves are still more efficient. And because radio waves travel so quickly, they offer the possibility of two-way communication. So the efforts of researchers looking for signals with giant radio telescopes--like those at the California-based SETI (Search for Extraterrestrial Intelligence) Institute--are worthwhile, he says.

Still, says Rose, there's something to be said for sending a message out for "posterity," and for devising ways to look for physical messages that other life forms may have shipped across space, hoping to find us.

Rose's Nature paper was the first quantitative comparison of the costs of the different ways of delivering information across space. Since then, Rose has been working on the next logical question: If sending a physical message is the most efficient way to communicate, in what form might these message arrive, and how should we look for them?

He stops short of guesswork, though, preferring not to speculate about what an extraterrestrial life-form might say or why it might want to communicate with people in the first place. For Rose, it's not about psychology or science fiction: "It's just the physics, ma'am."