Life Can Be a Strain

From enormous mining trucks to human knee implants, sensor technology is teaching us when enough is enough 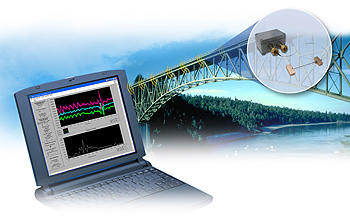 Powered by mere vibrations or the movement of magnets, novel sensors and transmitters developed by a small company in Vermont are changing the way engineers are looking at fatigue.

Communicating wirelessly via the Internet to engineers halfway across the world, the embedded sensors developed by MicroStrain--a small business based in Williston, Vt., and supported by the National Science Foundation (NSF)--are revealing how objects as diverse as the Liberty Bell, enormous mining trucks and even human knees respond to daily use.

By monitoring strain levels and tracking the cumulative effects of fatigue, the researchers' ultimate goal is to supplant the nearly universal system of "replace by this date" with a smarter approach of replacing components based upon the actual operating loads components experience.

"By calculating the amount of fatigue that a component has been exposed to, it is possible to repair or replace the component only when required," said engineer Steve Arms, president of MicroStrain. "Properly implemented, this can significantly reduce costs."

MicroStrain has received several NSF Small Business Innovation Research Program awards to support the development of cutting-edge sensors and compatible wireless transmitters that can carry their information to monitors around the globe.

In an early, high-profile test of their technology, Arms and three of his staff joined curators at the National Park Service's Independence National Historical Park to monitor the Liberty Bell in the fall of 2003. Visitors from around the country converged in Philadelphia, Pa., to watch the 250-year old icon travel roughly 200 yards from its circa-1970s home to the new Liberty Bell Center.

Care was critical because a hairline fracture extends from the Bell's famous crack across to its crown. The "crack" itself is actually a repair, a widening of an earlier crack, which prevented annoying vibrations.

To monitor the Liberty Bell during the move, MicroStrain used their Nano DVRT sensors, devices that can measure strains down to millionths of a meter. MicroStrain originally conceived the sensors for measuring the displacement of positioning stages, precision platforms used in the semiconductor industry to position components, yet the company engineers realized that the devices had utility beyond this one application.

During the move, the engineers used a suite of equipment from the MicroStrain arsenal: Nano DVRTs monitored both width and transverse shear along the crack; a strain gauge inside the Bell at the tip of the hairline checked for potentially damaging strains that could propagate; and wireless accelerometers monitored vibration and shock loads. All of the sensors transmitted real-time displacement and strain data to the engineers via wireless nodes.

Watching displacement changes that measured only microns, the team ensured that from the time the riggers placed the Bell on its custom cart to the time the 2,080-pound object settled into its new supports, no damaging stresses occurred that could have threatened to split the Bell in two.

The strain gauge still remains in place and could one day monitor the effects of ambient vibrations from traffic, or from children jumping up and down near the display.

Curators are now considering what the latest generation of sensors, capable of collecting more data at a higher sensitivity and without the need for batteries, might be able to tell them about the daily exposure the icon endures.The continuous data set would guide future decisions about how the Bell is displayed and help prevent its massive, yet still fragile, metal structure from failing.

"The 2003 move was the most activity the Liberty Bell had experienced in 30 years, and that's an extreme baseline," said Karie Diethorn, chief curator at Independence National Historical Park. "We're trying to find a way to make the Bell a subject of long-term scientific scrutiny, which actually shows how the core preservation mission of the Park Service is similar to the mission of some industrial technologies."

On a much larger scale, the latest generation sensors and transmitters are now in place on wheeled loaders used in construction and mining operations. MicroStrain has fitted five loaders with a total of 60 sensors to measure strain on welded joints and help predict remaining component life. Just like with the Bell, the sensors measure strains while transmitters feed the information wirelessly to computers.

"This is like a 'nervous system' for big mining equipment," said Arms. "By predicting when welds may fail based upon actual severity of usage, our customers are able to streamline the maintenance requirements for each machine."

The same logic applies to the human body. In 1998, Arms was approached by Darryl D'Lima of the Scripps Research Institute in La Jolla, Calif. D'Lima was working with several partners to develop an artificial knee that would not only replace damaged structures, but would also record and transmit data about the stresses every human knee must experience each day.

For the first time in medical history, researchers were able to watch how every action, from climbing stairs to walking, directly impacts the knee.

"For several years we worked unsuccessfully with several large companies and university research departments specializing in sophisticated electronic communication devices to come up with a solution for the telemetry link," said D'Lima. "When we finally contacted MicroStrain, they designed the first telemetry enabled prototype within months."

Since then, MicroStrain has developed a 12-channel, remotely powered monitoring system, which surgeons implanted in four patients over the last two years. Now, in addition to getting compression data, the sensors are recording moments and force, information that will ultimately lead to the next generation of orthopedic implants.

"Such technologies, and their impact on U.S. industry, illustrate the goals of the Small Business Innovation Research program," said George Vermont, the NSF officer overseeing MicroStrain's awards."When we first awarded funds to MicroStrain in 1997, company revenues were several hundred thousand dollars, almost all as grants. Today, MicroStrain is making annual revenues of over $4 million, half from the NSF-supported technology and almost all in product sales."

These applications are only the beginning. Arms envisions the technology finding uses in bridges, heavy military equipment, ships, unmanned vehicles--anywhere objects are subject to fatigue.

"We are excited to contribute to the wireless revolution in the sensing industry," said Arms. "Wireless sensors are changing the way we monitor machines and structures, making it possible to take measurements in applications that were impossible or impractical until recently. The ability to calculate remaining fatigue life based upon usage rather than replacing components based upon a schedule, not only reduces maintenance costs, but can also prevent accidents where components are used beyond the limits for which they were designed."

About the NSF Small Business Innovation Research program: NSF plays a key role in supporting small business research to help drive innovation and commercialization of novel products and processes. The NSF Small Business Innovation Research (SBIR) and Small Business Technology Transfer programs target small businesses and their partners at universities, enabling the companies to pursue high-risk science and engineering research that could one day prove both useful and economically valuable. In fiscal year 2006, NSF provided nearly $105 million to support small business programs. For additional information about the SBIR program and its support of sensor technology, contact Juan Figueroa at (703) 292-7054, or at jfiguero@nsf.gov.

About MicroStrain: MicroStrain is a privately held corporation based in Williston, Vt. that produces smart, wireless, microminiature displacement, orientation and strain sensors with applications including advanced automotive controls, health monitoring, inspection of machines and civil structures, smart medical devices and navigation/control systems for unmanned vehicles. For additional information, contact Michael Robinson at (802) 862-6629 or mirobinson@microstrain.com, or Steven Arms at (802) 862-6629 swarms@microstrain.com.

Related Agencies
Department of the Interior