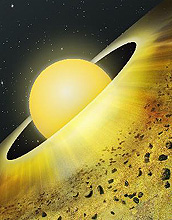 An artist's depiction of the pebble-filled disk surrounding the young star TW Hydrae.

The constellation Hydra is named for a twisting snake that, according to Greek mythology, was rejected by the god Apollo and cast up into the sky. For astronomers, however, this region of space is becoming a straight pathway to understanding how the universe works. One of the constellation's star systems, TW Hydrae,* has been the subject of much recent study due to its proximity to our solar system. The star is located 180 light-years away from Earth, close enough to call it a neighbor.

Powerful radio and optical telescopes are providing a better look at TW Hydrae, as well as other regions of the universe. Astronomers have discovered new "dwarf planets" within our solar system, and nearly 200 extra-solar planets orbiting stars quite like our own.

But until recent years, no astronomer had observed planet formation from its early stages of infancy. In 2005, David Wilner, an astrophysicist at the Harvard-Smithsonian Center for Astrophysics, discovered that the gaseous disk surrounding TW Hydrae holds vast swaths of pebbles extending outward for at least one billion miles.

The pebbles could be the stuff that future planets will be made of. The planet formation process, according to common theory, begins when dust grains in a disk collide and accrete to form larger and larger clumps. Eventually, after millions of years of colliding and combining, the clumps form planets.

Wilner and his colleagues used the National Science Foundation (NSF)-funded Very Large Array (VLA) radio telescope to measure the strength of radio waves emitted by TW Hydrae. Based on the relationship between wavelength and particle size, they determined the grainy materials surrounding the star to be centimeter-sized.

According to Wilner, the team's discovery came almost by accident and with a good dose of irony. One of the collaborators, Mark Claussen of the National Radio Astronomy Observatory, thought the strong and variable emissions detected from TW Hydrae in previous x-ray detections indicated magnetic activity common in young stars. Claussen thought that if they monitored TW Hydrae at radio wavelengths for a period of a few months, they could determine if the emissions might be strong enough to image at a much higher resolution with the NSF-funded Very Long Baseline Array and study this activity. To their surprise, they found that the radio emissions did not vary significantly.

"Frankly, it was a puzzle," said Wilner. "I had it on my desk for about a year with no idea what to do with it."

He decided to revisit the VLA. The observatory's twenty-seven operating antennae are spread throughout the plains of San Agustin, N.M., and arranged in one of four configurations that are changed every few months. In their closest configuration, the antennas cover about 0.6 miles (1 kilometer), while in the largest configuration, they span up to 22 miles (36 kilometers) across. At its highest frequency, the telescope has a resolution of .04 arc seconds. To put it in perspective, if Tiger Woods' eyes had this same capacity, the champion golfer would be able to spot a golf ball 100 miles away!

Wilner found his pebbles using a larger configuration and higher angular resolution of the VLA. He enlisted the help of Nuria Calvet, a colleague at the Center for Astrophysics, who created a computer model of the disk surrounding TW Hydrae using previously published data.

"For the first time, you could see dust emissions of grains that had evolved into such a large size," said Wilner. "This is a crucial step in the formation of planets." Wilner published his research in the June 20, 2005, issue of the Astrophysical Journal Letters.

Wilner's examination of TW Hydrae began in the late 1990s, enabled by the new capabilities of telescopes. "TW Hydrae is an important young stellar system and unique in being nearby," he said.

It is only 5 to 10 million years-old, a mere toddler compared to our 5 billion-year-old Sun. The younger star is four-fifths the size of the Sun, and its surrounding disk has a radius equal to about 200 times the distance from Earth to the Sun.

Wilner believes the current project to enhance the VLA will allow him and others to explore star systems beyond TW Hydrae.

NSF is currently refurbishing and updating the telescope's receivers to allow increased data sensitivity, more efficient transmission of data, and fine-tuned estimates of how emissions vary with frequency. Half a dozen receivers have been outfitted so far and the project will be completed in 2011.

"The VLA is a tremendous facility," said Wilner. "The upgrades will make everything ten times faster."

Using the VLA and other advanced instruments, Wilner and his colleagues hope they will be able to better understand how solar systems evolve. Just recently, Wilner collaborated with his graduate student, Meredith Hughes, and several other colleagues to identify a hole in TW Hydrae's dusty disk. Wilner says that the hole was probably created when a Jupiter-sized planet cleared that gap of much of its rocky material. This latest research was accepted for publication by the Astrophysical Journal in April 2007.

He expects future research involving planet and star formation will be enhanced by the NSF-funded Atacama Large Millimeter/submillimeter Array (ALMA), which promises to be the world's most sensitive, highest resolution, millimeter-wavelength telescope. In addition to the improved sensitivity and resolution, the new telescope affords another advantage, according to Wilner. TW Hydrae is located in the southern sky, so the ALMA site in the mountains of Chile will allow more detailed imaging of the star.

* WhyTW Hydrae? It comes from a system devised by astronomers to describe a star's brightness. The convention was to start with A, B, C, etc., in order of descending brightness. After all the single letters are gone, they use double letters, such as AA, AB, AC... BA, BB, BC, etc.  TW indicates a pretty faint star. But in a cluster with many hundreds of stars, it would be easy to reach that letter combination. (Return to the story.)