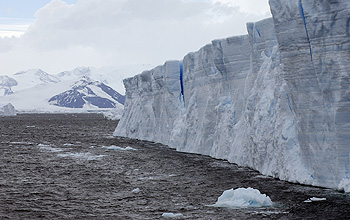 The remains of the former Larsen B ice shelf seen near Cape Fairweather (taken February 2005).

After the Larsen B ice shelf--a massive slab of ice the size of Rhode Island--broke apart from the Antarctic Peninsula and disintegrated five years ago, scientists undertook numerous research expeditions, expecting the region to provide clues to climate change. What they may not have expected, however, is the ice shelf's collapse would provide a rare glimpse of previously undetected life-forms. The surprising find--a seafloor community, surviving in the sunless depths of the ocean without any apparent source of nutrients and energy--was captured on video.

The biological breakthrough was made by chance during a 2005 National Science Foundation (NSF)-supported Antarctic research cruise led by scientist Eugene Domack, a geosciences professor at Hamilton College in New York. Domack is no stranger to Antarctica. He has participated in 20 field seasons there, 13 as chief scientist. NSF has supported his research since 1987.

In 2004, Domack began a 3-year study of the causes of the Larsen B ice shelf's collapse, seeking to determine whether it was a unique event or part of a cycle that goes back thousands of years. The research team set off in April 2004 aboard the research vessel Laurence M. Gould. Although thick ice prevented the crew from accessing the area of the ice shelf's collapse, the team made an exciting finding. After examining data gathered from mapping, sampling and underwater video, they announced the discovery of an active underwater volcano in the Antarctic Sound.

The following year, Domack and an international team of researchers returned to study the region's sediment record and collect data. On Feb. 11, 2005, the Gould departed from Punta Arenas, Chile. Professors and students from several universities including Hamilton College, Colgate University and Southern Illinois University gathered core samples and water samples at stations set up along the journey.

The main tool used for sampling is the Kasten core, a long metal tube that is heavily weighted to penetrate the seafloor and often collects several meters of sediment. Another instrument, the CTD (Conductivity, Temperature, Depth) is used to measure water properties. The crew also deployed an underwater video sled to map the little bumps and tiny hills covering the seafloor landscape.

On the return trip, the team began analyzing the data they collected. The last five minutes of their 20-minute videotape revealed the most unexpected discovery in a deep basin in the northwestern Weddell Sea. The grainy images showed white bacterial mats composed of thousands of golf ball-sized bumps coating the ocean floor and also a concentration of very large clams clustered around an active vent in the seafloor.

"The videotape was curious to most of us," said Domack. "We did not expect to find a whole lot of life there, yet."

Unfortunately, by the time the crew made the video discovery, they were six hours north of the site of that marine life and could not turn back to do additional sampling of the seafloor.

Back in the States, and fully caught up on sleep, Domack decided to consult colleagues with more knowledge of deep-sea ecosystems. The collaboration resulted in an article published in the American Geophysical Union's July 19, 2005, issue of Eos, the organization's weekly newspaper. Domack and the coauthors of the article stated their belief that the newly discovered ocean floor ecosystem was a "cold-vent" community of chemotrophs--organisms that obtain energy from methane seeping through vents in the ocean floor. At a depth of 2,800 feet (853 meters) and under the previous 600-foot (182 meters) -thick ice shelf, the organisms would have no access to sunlight that most organisms need to conduct photosynthesis.

Domack said the discovery of the chemotrophic system is the first of its kind in the Antarctic. The ecosystem could provide clues to how life survived during ancient glacial periods when the planet's surface may have been frozen. The research bolsters the possibility for finding life in other remote areas of the world, and encourages exploration of uncharted Antarctic territory. Domack said that new species may still be discovered. Two of the organisms found in the 2005 video have not yet been identified.

Glaciologists and biologists interested in studying the Antarctic further may have a hard time getting there, however. Domack encourages scientists to expand their horizons and collaborate on an international level, since competition for ship time to the remote, inhospitable region has become increasingly competitive.

Domack accompanied Hamilton biology professor Mike McCormick, who had received a small grant for exploratory research from NSF, on a return cruise in 2006, but icy conditions prevented the ship from doing sampling at the site of the ecosystem. Luckily, however, they were able to get a multi-beam image that provided a 3-D view of where the methane seep was located. Domack shared this image data with a team of German scientists from the Alfred Wegener Polar Institute who were planning an expedition to the area in January 2007.

With the help of Domack's map, the Germans arrived at the location of the vented community only to find it devastated. Dead clams were strewn along the bottom. The researchers also reported that there were organic layers buried under several layers of silt. Without the shelter of the ice shelf, Domack believes sediment and organic matter had accumulated and buried the fragile ecosystem.

The sobering transformation of the unlikely community may help scientists nail down the question of how closely linked ecology is to ice shelf conditions.

"It may very well be that the ice shelf provided the habitat to allow the chemotrophic system to exist...that the community exists because of the ice shelf, and not in spite of it," said Domack.

He hopes to return to the Antarctic to survey the extent of the damage to the ocean floor vent community in more detail, noting that there is still much scientists can learn from sub-ice shelf communities.

"We still want to know why the ecosystem existed and why it went," Domack said.