The Evolution of California Firefighting

What does high performance wireless networking have to do with fighting wildfires? Plenty, according to California fire captain Ron Serabia. 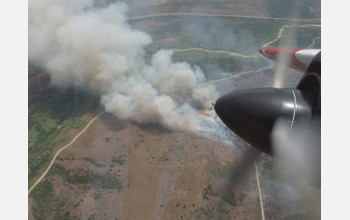 The view from the cockpit as Ron Serabia flies over a California fire in an OV-10 aircraft.

Whether flying aerial attacks against wildfires or scaling towers to install wireless relays, southern California firefighter Ronald Serabia has witnessed a transformation in both emergency response and emergency communications. Fighting California blazes since the 1960s, Ron has seen the evolution from handwritten reports and fire hoses to wireless Internet relays and airborne fire-retardant drops.

In excerpts from his interview with Kimberly Mann Bruch, Serabia reflects back on his career--from before his earliest firefighting days to his recent work helping researchers with the National Science Foundation's (NSF) High Performance Wireless Research and Education Network (HPWREN) develop cutting-edge digital links to connect local command posts, the state capital, and firefighters' families during major wildfire disasters.

Kimberly Mann Bruch: First of all, we'd like to have some insight about how you started your career as a firefighter.

Ronald Serabia: Well Kim, growing up back in the fifties, Ramona, California, was a little town that only had about 2,000 people. Everyone was friendly where I grew up--across the alley from the Ramona Volunteer Fire Department, where my dad was a fireman. I remember the wail of the siren on the fire station roof and off he'd go--running across that alley and hopping on one of the fire engines to go help extinguish the blaze. It was around this time--I must have been about eight-years-old--when I knew that I wanted to be a fireman.

We moved to Chula Vista in 1965 where I finished high school, and I worked as a college sleeper at the Montgomery Fire Department--was paid 200 bucks a month, a place to sleep and dinner every night. In exchange for all this, I fought fires and helped with writing reports at the station while going to school at Southwestern College where I studied Police Science--back then there wasn't a Fire Science major available there for us.

Then I was planning on actually becoming a California State Highway Patrol Officer--kind of venturing away from my original childhood goal of becoming a fireman. But after temporarily losing the vision in my right eye during a firefighting accident, I could not complete the physical for CHP, and had to leave the exam process. . . . I ended up returning to my original dream and wound up working as a seasonal firefighter the summer of 1969 with CDF--the California Department of Forestry and Fire Protection--at the Julian Fire Station. . . .

[After a promotion to Fire Captain in 1977], I was assigned to the Warner Springs Fire Station, one of the best station locations in San Diego, with more than 300 days of sunshine, quiet, a great view of the Palomar Mountain. And always a cool breeze...

We were still using two-way voice radios, but they became a bit more powerful over the years. And, in 2001, we were still using handwritten reports to document incidents; typewriters were available, but few firefighters were proficient at using them. As for the radios, the ones we use in the aircraft are some of the best available. However, communication in the fire service still has many areas of weakness--such as the lack of real-time imagery and data--other than voice.

Kimberly: How would real-time imagery and real-time data help you out?

Ron: By giving the ground firefighters an exact image of what I see from the air. It's easy to describe something, but in the case of large fires like the [2003] Cedar Fire, words can't explain the complete devastation and destruction over such a huge area. It's kind of like I told a news reporter during the Cedar Fire, I had the best, or depending on your view, possibly the worst, seat in the house.

I'm the one that sits tandem--behind the pilot--of an OV-10 Bronco and I use six radios. I'm the aerial traffic coordinator for all aircraft assigned to a particular incident. We stay in an orbit at about 3,000 feet above ground level--directly over the incident--and coordinate all the fixed and rotary wing assignments using FM and VHF radios. We also give the Incident Commander our view in words on tactical decisions and plans for suppression and control of wildfires. Every aircraft assigned or operating near the incident, including news media and law enforcement, can only fly with our permission and control. Civilian and military aircraft that may fly into our incident are warned to stay away by Department of Defense Notice to Airmen (NOTAMS) that we place with the FAA through radio contact.

Kimberly: What were the communication methods used when you first started?

Ron: In the mid-nineties, when I became air tactical group supervisor at the Ramona Air Attack Base, we were using two-way VHF and FM radios as our main mode of communication. We also got a personal computer with limited dial-up Internet access sometime in the nineties. With that, we could transfer data to and from the CDF headquarters in Sacramento--personnel timesheets, aircraft flight data, incident reports, and such. But even with this advance, I'd be on the computer for a minimum of three hours just to transmit three timesheets.

Kimberly: So, how has your method of communication changed since 2001?

Ron: It was only in the last few years that California firefighters joined forces with HPWREN to bring emergency communications to the next level. CDF Fire Captain Carl Schwettman met Hans-Werner Braun--a researcher at the University of California, San Diego, and HPWREN's leader--at a 2003 first responders meeting, and both of them were interested in how the Ramona Air Attack base might use a high-speed, wireless Internet connection to bring crisis communications into the 21st century.

Because the air attack base is situated in a remote, hard-to-reach area, no other method of digital communication was available--Hans-Werner's idea of connecting the air attack base to HPWREN sounded great to Carl. At the time, I was Fire Captain at the Ramona Air attack Base. It must have been sometime in June when Carl called me and said that some crazy German research guy from UCSD was interested in talking to us about getting some high performance network connection at the air attack base. All I could think was, "Cool!"

We got connected to HPWREN on July 4th, Independence Day, and as the month went on, I started to realize that there was more to the network than cutting the time it took to send out those three timesheets from three hours to thirty minutes. The system got its first real-world firefighting test with the Coyote Fire, an intense blaze that ravaged 17,000 acres in southern California. CDF sent 1,700 firefighters, nine helicopters and seven bulldozers into that battle.

We had ten CDF airtankers and nine helicopters assigned to the Coyote Fire, which was started by lightning north of Warner Springs. It was first reported as being in Riverside County, as they also were working a fire near Idylwild. So there was confusion and delay in sending resources. A camera, if placed on High Point (United States Forest Service - USFS), would have verified the fire was indeed in a very rugged location in San Diego County. The winds were very erratic and gusty, making our first retardant drops very dangerous. The fire was driven for five days by strong winds from thunderstorms and drought-stressed fuels that had not burned since 1945.

Ron: The Incident Command Post at Puerto La Cruz was connected directly to HPWREN by relays, and it was then that we started to realize the benefit of high performance data communication during incidents. We were able to send real-time info to headquarters in Sacramento and the overall firefighting effort became a lot more efficient.

Prior to this connection to HPWREN, all of our data was sent over dial-up and it took four or more hours. During the Coyote Fire and current incidents, we were and are able to transmit the reports in real-time so that headquarters can better organize firefighting efforts for not only our local fire, but fires throughout the entire state.

In addition to relaying words, we can also now send real-time images. The HPWREN cameras and sensors on top of San Diego mountaintops were vital to officials at headquarters during the Coyote Fire especially--administrators could view the actual real-time images and had the ability to make better decisions as they managed the incident from afar.

Kimberly: Is this the time period that you became more involved with the HPWREN technology?

Ron: Yes--just afterwards. Hans-Werner and his research partner Frank Vernon had seen me give a few presentations about these firefighting efforts and in 2004 asked me if I'd be interested in formally joining the team as the project's first responder coordinator. My first activity with the group was in March, when I helped install an HPWREN-connected camera on top of Lyons Peak in San Diego County. From there, I had many adventures in tower climbing, antenna installations, and sensor and camera installations.

Kimberly: Any specific installation adventures that stick out in your mind?

Ron: I've spent many great days since retiring as a fire captain to work with the HPWREN team--installing microwave antennas, radios, cameras and weather instruments at some of the best locations around San Diego County.

I remember the first day at Lyons Peak with Hans-Werner, Jim Hale, and Bud Hale very well--as Bud gave me a safety briefing of the use and purpose of the climbing harness before my ascent up the 180-foot tower. Then, at lunchtime, we were discussing what I used to do with CDF and firefighting, and I mentioned the frequent daily safety naps. Well since that day, it's been a point of discussion and humor, especially after a long morning working on a HPWREN site...

I'm now the first responder coordinator with the HPWREN team for implementing high-speed connectivity at remote fires--like the Volcan Fire in September 2005 and the Border 50 Fire in October 2005. I also help Hans-Werner with research on the 4.9 gigahertz public safety band that first responders will someday use during incidents. And, I also spend time looking into weather stations, cameras and sensors that we might add to the always-growing HPWREN-connected mountaintop camera and sensor systems. . . .

But, I'd say that the highlight of the past year--2006--was the installation of four cameras and weather sensors at Lyons Peak and establishing the Incident Command Post (ICP) connection for the Volcan Fire near Julian. Connectivity to HPWREN from this extremely hard-to-reach ICP was a major challenge, but we managed to make the link work within only a few hours.

Kimberly: What do you predict as the future of firefighting and the utilization of HPWREN or a similar system?

Ron: The major wildfire of 2006 was the Horse Fire and by now the CDF clearly recognizes the need for an HPWREN-like system for the transmission of data to and from state headquarters in a timely manner. We're continuing to work with them to research and explore new ways that the 4.9 gigahertz public safety band can be useful for rural incident locations. If agreements and requirements can be met by CDF, then we plan on connecting the Emergency Command Center to HPWREN using 4.9 gigahertz radios. Ironically, the USFS dispatch is co-located with CDF there, so they will also benefit from the new link. This will assure both agencies of a high-speed backup link to use during major incidents here in San Diego County.

To learn more about this work, please contact the author at kbruch@ucsd.edu.