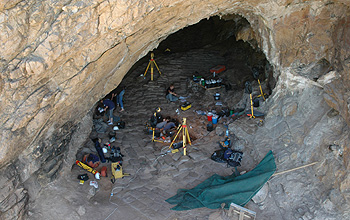 Ever hanker for Mrs. Paul's fish sticks or have an overwhelming need to trust the Morton's fisherman? Well, you're not alone. New research suggests humans may have eaten seafood more than 40,000 years earlier than previous estimates, and it may have been a catalyst for early human migration out of Africa following a coastal route.

The discovery, funded by the National Science Foundation (NSF), was made by scientists from Arizona State University and a group of national and international colleagues (see sidebar below for a related discovery).

Curtis Marean, from the university's Institute of Human Origins, said introduction of shellfish into the early human diet might be the result of climate changes that caused the availability of earthbound foods to decrease, and thus people switched to coastal foods to survive. The ability of humans to use food from the sea also meant they could travel around the coasts of Africa and establish new settlements.

The team's findings come from studies of archaeology joined to the climatic, environmental and ecological history of Pinnacle Point, a sea cliff along the south coast of South Africa where a large number of caves overlook the Indian Ocean. One cave, called cave 13B, is the focus of intense excavation work and has been since 2000. Researchers seek clues about how environmental changes affect human behavior and evolution.

"Shellfish may have been a critical food source for the survival of early human populations," Marean said. "For millions of years, humans survived on inland plants and animals. Shellfish was one of the last additions to human diet before the introduction of domesticated plants and animals at the end of the ice age, also called the Pleistocene."

He bases his premise, in part, on archaeological deposits and finds including 15 categories of marine invertebrates and a whale barnacle fragment found in cave 13B. The team's conclusions also result from a scientific analysis of the Pinnacle Point coastline. Researchers associate collection of marine invertebrates with hunter-gatherers developing more complex economic and social systems and reducing mobility.

In this case, the evidence supports a conclusion that humans in the Pinnacle Point area collected shellfish at low tides during the Middle Pleistocene, about 164,000 years ago, as estimated by radiometric dating techniques. A 3-D geographic information system (GIS) model that maps Pinnacle Point sea levels at 1,500 year increments for the last 400,000 years also supports the dating.

Prior studies suggest foragers rarely transported marine resources more than 5 to 10 kilometers. The GIS model shows the coastline moved within that distance 167,000 years ago, a result consistent with dating of the archaeological deposits found in cave 13B.

Until now, the earliest dated archaeological evidence for human use of seafood, sea shells and other marine resources dated to 125,000 years ago. These new results indicate coastlines may have become attractive for human settlement and movement earlier than originally thought.

"They prove humans had an ability to move out of Africa via the Red Sea coast and migrate to Australia and New Guinea along the coastal corridor thousands of years before we originally suspected," Marean said.

Marean's paper, "Early human use of marine resources and pigment in South Africa during the Middle Pleistocene," is scheduled for publication in the October 18 edition of the science journal Nature.

An amazing foreshadowing of Leonardo Da Vinci's Mona Lisa and Mike Tyson's facial tattoos was also found in the 164,000 year-old sediment in cave 13B.

No, it wasn't the chair in which Mona Lisa posed for her famous painting or the high-quality tattoo machine used to draw the equally artistic tribal tattoo on Mike Tyson's cheek. It was something social scientists say is more valuable--the oldest known evidence that humans are wired for artistic expression, whether fine art or body art.

In an ancient cavern near the Western Cape province of South Africa, researchers found 57 pieces of pigment or substances used as coloring agents. The pigments were among the oldest artifacts in the cave traced to human activity.

"The pigments have all the hallmarks of those used for body-painting and perhaps coloring of other organic surfaces," said Marean.

According to the researchers, 10 pieces of pigment were definitely used and two pieces probably were used.

There is extensive evidence of pigment use dating to 120,000 years ago. However, many coloring agents near this age, or older, are variably distributed outside South Africa. For example, in Israel some are dated to 92,000 years ago, and at Twin Rivers in Zambia, they are dated to between 141,000 and 400,000 years ago.

According to Marean, the find shows that the humans who lived in cave 13B preferred processing the reddest pigments, which is similar to finds in more recent sites. However, this pattern of pigment use occurred 40,000 years before such use apparently flourished post 120,000 years ago.

Coloring agents found in cave 13B now join this patchy sample of middle to late Pleistocene evidence for early pigment use by humans. But dating them to 164 thousand years ago makes them the most securely dated of the small sample of old finds.

"We have identified the earliest appearance of pigment use and dated it to a time close to the biological emergence of modern humans," Marean said.

Related Awards
#0524087 Paleoclimatic and Paleoenvironmental Context of the Origins of Modern Humans in South Africa: Constructing a Detailed Record from 400,000 - 30,000 Years Ago
#0130713 Excavations at Cave 13B, Pinnacle Point at Mossel Bay, South Africa: Faunal Exploitation, Raw Material Procurement, and Organization of Domestic Space During the Middle Stone Age