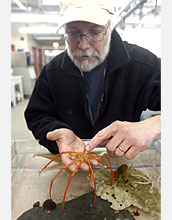 The vital organs of the sea star Sam Bowser is holding are in its many legs.

For 20 years, Sam Bowser, a scientist at the New York State Department of Health's Wadsworth Center, has dived the frigid, yet surprisingly, biologically rich-waters of McMurdo Sound, Antarctica, in search of single-celled creatures known as Foraminifera.

Among the most abundant organisms in the oceans, the scientifically interesting aspects of Foraminifera, or forams for short, far exceed their physical size. The largest of the species might reach the size of only a fingernail, yet they are able to capture and eat creatures many times their own mass.

From a global perspective, the drive to understand these creatures is, in part, a result of their role in recycling nutrients in the oceans. Because of the huge numbers of Foraminifera in the seas, when they make their calcium carbonate shells, they act as a "carbon sink," absorbing carbon from the water. Scientists are very interested in knowing how this contributes to balancing greenhouse gases such as carbon dioxide in the atmosphere.

While Bowser's primary research goal is simply to understand as much fundamental foram biology as possible--habitat, life cycle, reproductive patterns, eating habits, how the organisms evolved--he has taken a particular interest in how these tiny organisms build miniscule, but sophisticated, shells out of grains of sand using an extremely effective underwater adhesive.

Bowser is pursuing basic research into these questions under the auspices of the U.S. Antarctic Program managed by the National Science Foundation, and if the effort reveals the chemistry underlying the naturally produced glue, the research could lead to the development of stronger biological adhesives that could be a boon in fields as diverse as dentistry, neurological surgery and the development of artificial arms and limbs.

Like most things in life, however, Bowser has found that the adhesive material secreted by Foraminifera is more complex than it first seems.

The foundation of the adhesive appears to be a protein, which in turn, is heavily coated with sticky carbohydrates. The cells secrete the different components from distinct organelles into a membranous pocket, and then draw the composite into a sticky fiber.

Breaking the material into its components for analysis has been a tricky proposition. Bowser claims he has "gummed up" so many sensitive analytical tools that his chemistry colleagues use his photo as a dartboard.

Recently, he has turned his attention more deeply towards the evolution of the adhesive substances. One of the biggest surprises involved the earliest-evolving species that secrete adhesives. Instead of finding evidence for a progression from structurally simple to more complex glues, Bowser learned that simple and complex types occur together within more primitive groups.

The goal of using these adhesives in biomedicine remains elusive, but slow progress is being made in understanding their origins and their importance to the biology of the organisms that created them.