Search Is on for Hot Young Stars 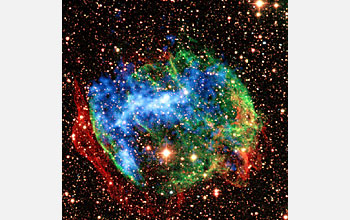 On average, at least three gamma-ray bursts occur somewhere in the heavens each day. Shri Kulkarni has trained his eyes up to these new wonders with his latest research in this emerging field.

(Gamma rays are the most energetic form of radiation on the electromagnetic spectrum, which includes x-rays, visible light and radio waves.)

"The gamma-ray burst goes off and we use the Keck I telescope to measure its spectrum, which tells how far away it is," said Kulkarni, the John D. and Catherine T. McArthur Professor of Astronomy and Planetary Science at the California Institute of Technology. "Most gamma-ray bursts are very far away, and we believe that they occurred with much greater frequency when the universe was young."

When the pressure generated by this reaction diminishes, the pull of gravity forces the star's matter to collapse in on itself. For some extremely massive stars, the force of the collapse is strong enough to create a black hole and the energy is sufficient to power a massive explosion, resulting in an eruption of energy and light.

Occurring on the very edges of our universe, these stunning explosions create a powerful light source which allows astronomers to gaze deeper into space. Long-duration gamma-ray bursts last for just a few seconds, but the light is sometimes so strong that the 'afterglow' exists for months at a time, illuminating details in space that would have been nearly impossible to see before. This "long-duration class" of illumination is what helps Kulkarni undertake detailed observations with the Keck telescope.

"Gamma-ray bursts are nature's light post, and you can use their luminescence to study everything between the gamma-ray burst and you," added Kulkarni. "If you happen to be there the hour after a gamma-ray burst happens, you can collect more information than you can possibly imagine."

Seventy-five percent of all gamma-ray bursts are in the long-duration class, the soulful death cries of a once massive star. The other 25 percent exist in the short-duration class.

The differences between the two classes raise questions that are driving the research horizons in this field. Kulkarni is hoping to focus next on what differentiates the power between the two types of gamma-ray bursts while also investigating the unknown forces that initiate these galactic marvels.

"How do you decide what to do next?" ponders Kulkarni. "I think most scientists do not take a critical view. It is very easy to keep doing what you're doing, especially when the science questions are interesting. Yet, I believe it is important to assess your work and see if it is worth continuing. You can become a guru of the field, and maybe this is comfortable . . . my life has been pleasantly full because of discoveries I have made. But, by throwing myself into a new area, there is an opportunity to see things differently."

Related Websites
LiveScience.com: Behind the Scenes: Search is on for Hot Young Stars: http://www.livescience.com/space/070921_bts_gamma_rays.html