Getting to the Core of Climate Change 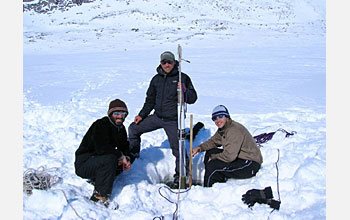 On May 29, 2007, the wind was howling in Clyde River, a small town located at 70 degrees north latitude on Baffin Island, Arctic Canada. Snow drifts piled around our cabin and packed ice grains into every crevice of the snowmobiles outside. As a master's student, I was one of a team of seven geologists working to collect samples that would help us understand past climate change.

Our little cabin shook with each gust, and once in a while, I would feel a dusting of snow coming in through the cracks. But inside, seven people and a camp stove kept things warm and cozy.

We had reached the end of a successful field season collecting lake sediment cores. Our daily routine for more than two weeks had been to wake up around 8 a.m. to a breakfast of coffee and oatmeal, followed by a snowmobile ride across a fjord and into beautiful glacially carved valleys to our study lakes.

To obtain sediment cores from lake beds, we first had to drill a hole through 6-foot-thick ice cover. Then we dropped a core tube through the hole and hammered it into the sediment below. After pulling the cores up to the surface, we carefully packed them and carried them back to the cabin. Comfort awaited us at the end of the day, after we dried our clothes, when we could play cards, eat dinner, tell stories and plan for the next day in the field.

The ultimate goal driving all of this work is to send lake sediment cores back to our lab at the University at Buffalo in Buffalo, N.Y. We run several analyses on each core, all of which help us to understand past environmental change.

The sediments in the cores can tell us about environmental change, both through the amount of plants and other organic materials and the concentration of diatoms (algae that live in the lake and sink to the bottom when they die). We can also examine the species of insects preserved in sediment, animals that we know to live in specific climates, to determine changes in the temperature of the lake water and the surrounding air.

My results from "recent" sediments (from 2,000 years ago to today) show modest warming over the last two hundred years and dramatic warming since around 1950. These results are supported by temperature measurements made by humans worldwide, which show particularly strong warming trends occurring in the Arctic.

Because the Arctic region is so sensitive to climate changes, the inhabitants of this region are and will continue to be profoundly affected by these changes. Because of this, we held outreach activities in the school in Clyde River to educate local children about our research and about the changes that we were observing.

We brought a sediment core sample into the high school science classroom and split it open with the students. We examined the different colors and types of sediment that were in the core, and developed hypotheses about the climate story that the sediment recorded. Later, in the elementary classrooms, the students were delighted to get their hands dirty with the 5,000-year-old mud.

The culmination of our outreach effort was a field trip to a lake near town, where we collected a sediment core with the students. We had a beautiful warm day, which made coring a much more pleasant experience. The students were excited to measure the lake depth, hammer the core tube into the sediment, and haul it back up. They were disgusted at first when we extruded the core out onto the lake ice, but they soon became interested in examining the sediment, and they all ended up wrist-deep in mud.

People around the world are affected by climate change, from Baffin Island, where the disappearance of valuable sea ice is profoundly influencing the native Baffin Island hunting culture, to Buffalo, N.Y., where we will soon experience the hot, humid summers typical of Virginia, and probably be covered by even greater amounts of lake effect snow in the winter.

My outreach efforts are an attempt to communicate the importance of my research and the impact of my findings to these people who will be affected by present and future changes. At the very least, I hope that the Inuit children remember the beautiful May day when they rode around the land with us and got their hands covered in 5,000-year-old mud.

Perhaps a few of them will be inspired to become scientists.

Related Awards
#0455024 Collaborative Research: A Synthesis of the Last 2000 Years of Climate Variability from Arctic Lakes

Related Websites
LiveScience.com: Behind the Scenes: Getting to the Core of Climate Change: http://www.livescience.com/4682-core-climate-change.html