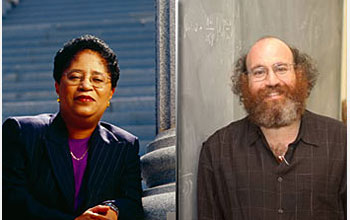 How can we use science to help solve the daunting catalogue of trans-border health, energy and quality-of-life challenges confronting our globalized, "flattened" world?  By developing scientific and technological techniques that transcend disciplinary boundaries, reflect diverse perspectives, and incorporate the contributions of traditionally underrepresented groups.

So said Shirley Ann Jackson to hundreds of the nation's top scientists at the opening symposium of the annual meeting of the American Society for Cell Biology (ASCB) in Washington, D.C., on Dec. 1, 2007. Jackson is president of Rensselaer Polytechnic Institute (RPI), a former president of the American Association for the Advancement of Science and a recipient of the National Science Board's prestigious Vannevar Bush Award.

The symposium also featured a presentation by William Bialek that focused on techniques for training the next generation of scientists to think across disciplines. Bialek is the John Archibald/Battelle Professor in physics at Princeton University and winner of the President's Award for Distinguished Teaching at Princeton.

Jackson issued a sweeping call for "diversity in its very broadest sense--diversity-enhanced scientific discovery and technological innovation, and diversity-enhanced education.  Making progress in human health and in other arenas will require sustained and attentive leadership toward employment of diversity among scientists of every stripe."

Jackson supported her call for diversity by citing many new, successful strategies to global challenges that are being addressed by collaborations between diverse, multidisciplinary scientists and original, iconoclastic thinkers. Some examples:

Jackson also cited curriculum changes at RPI that are designed to extend students' experiences and outlook.  For example, Jackson said, "we are working to assure that the vast percentage of our undergraduate students have research experience before they graduate.  And, we are securing opportunities for every undergraduate to study abroad. We have made biology a requirement for an engineering degree, and we are considering making international experience a requirement as well."

Complementing Jackson's overarching tribute to diversity and multidisciplinary approaches was Bialek's presentation, which provided a focused description of a novel Princeton program designed to break barriers between disciplines. This Princeton program, which Bialek helped create, is an interdepartmental physics/chemistry program that emphasizes connections to biology.  (Slides from Bialek's speech are posted at http://www.princeton.edu/~wbialek/wbialek_ASCB07.pdf.)

Explaining the program's purpose, Bialek said, "there is a cultural divide in the sciences that is nearly as great as that between the sciences and humanities--[But at Princeton,] we want to educate biologists to be more quantitative and educate physicists to study a broader class of systems--we are promoting work at the interface between physics and biology."

To this end, Princeton's interdepartmental program, which is currently in its fourth year, serves as an alternative path for freshmen into the sciences. It is designed to foster broader perspectives than would traditional paths, without sacrificing depth. The program includes classes, labs and other activities that integrate physics and chemistry and cover applications to biological problems.

"If you want science students to be more mathematical, you can't solve the problem just by sending them off to the math department,' said Bialek.  "Instead, we need to teach them how math is integrated into the scientific world."

So, for example, although freshmen are typically introduced to probability in math classes and to gas laws in physics classes, freshmen in Princeton's interdepartmental program are introduced to these topics in a single class that shows how probabilistic concepts apply to problems ranging from the ideal gas to genetics to Brownian motion.  Such classes are accompanied by group exercises that introduce students to the types of collaboration required of professional scientists.

Princeton's program, according to Bialek, targets freshmen for the same reason that schools should introduce foreign languages to children as early in their education as possible: the younger you are, the easier it is to become bilingual and to become fluent in multiple scientific disciplines.

Evidence of the success of the Princeton program in preparing participants to contribute to the sciences includes the fact that large numbers of the program's participants have become physics and biology majors. Plus, says Bialek, program participants now enjoy a reputation in the university's science departments as "the go-to people for quantitative analyses."

But warned Bialek, "you can't solve boundary issues with a top-down initiative...or without genuine collaboration from all departments. At Princeton, we had the good fortune to have a group of faculty from all relevant departments who were interested in rethinking freshmen science education in the broadest sense."

And, Bialek said, the support provided by those multidisciplinary faculty members was critical to the success of Princeton's interdepartmental program.

Entitled New Biologists for the New Biology, the opening symposium at the ASCB meeting was funded by the National Science Foundation.