Winter Ice on Lakes, Rivers, Ponds: A Thing of the Past? 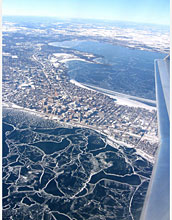 Ice cover on northern lakes across the United States has formed later each winter.

If you're planning to ice skate on a local lake or river this winter, you may need to think twice, according to scientists John Magnuson, Olaf Jensen and Barbara Benson of the University of Wisconsin at Madison. Their research is funded by the National Science Foundation (NSF) and was published in the September 2007 issue of the journal Limnology & Oceanography.

From sources as diverse as newspaper archives, transportation ledgers and religious observances, the researchers have amassed 150 years of lake and river ice records spanning the Northern Hemisphere.  All show a steady trend of fewer days of ice cover.

If the pattern continues, only in Currier and Ives prints will ice skaters twirl across frozen rivers.

The records show that later freezing and earlier ice breakup occurred on lakes and rivers across the Northern Hemisphere from 1846 to 1995.  Over those 150 years, said Magnuson, changes in freeze dates averaged 5.8 days per 100 years later, and changes in ice breakup dates averaged 6.5 days per 100 years earlier.  The findings translate to increasing air temperatures of about 1.2 degrees Celsius each century.

Now the scientists have looked more specifically at trends in ice duration in 65 waterbodies across what might be called the last bastion of winter in the United States--the Great Lakes region (Minnesota, Wisconsin, Michigan, Ontario and New York)--during a period of rapid climate warming (1975-2004).

Average rates of change in ice freeze and breakup dates were 5.8 and 3.3 times faster, respectively, than historical rates from 1846 to 1995 for the Northern Hemisphere.  Average ice duration decreased by 5.3 days per decade.

Over the same time period, average temperatures from fall through spring in this region increased by 0.7 degrees Celsius.  The average number of days with snow decreased by 5.0 days per decade, and the average snow depth on those days decreased by 1.7 centimeters per decade.

"The formation and breakup of ice are important seasonal events in mid- to high-latitude lakes and rivers," said Magnuson.  "The timing of these events--ice phenology--is sensitive to the characteristics of individual waterbodies and to broader-scale weather patterns and climate variability."

Changes in ice phenology have important consequences for fish and zooplankton communities, said Jensen.  Earlier ice breakup has created a temporal mismatch, for example, between the peak spring phytoplankton bloom and the population dynamics of some species of zooplankton.  Fewer days of ice cover are also likely to reduce or eliminate winter-kill in shallow eutrophic lakes.

In contrast to the observation that climate changes are occurring more rapidly at higher latitudes, said Benson, the greatest rate of change in ice breakup dates in the Great Lakes region is happening at lower latitudes, near the southern boundary of the area in which lakes are routinely ice-covered during winter.

During the late 1980s and early 1990s, for example, ice breakup occasionally occurred in mid-winter on two lakes in southern Michigan.  These lakes previously hadn't seen open water until spring.  By the end of the Great Lakes study period, from 1998 through 2002, several southerly lakes did not freeze over.

In lakes from Big Green in Wisconsin to Cranberry in New York, from Minnetonka in Minnesota to Gull in Michigan, winter--at least in the form of ice--is fast melting around the edges.